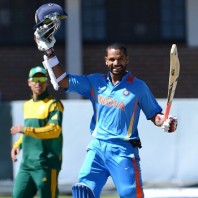 A sizzling knock of 248 from Shikhar Dhawan and a composed unbeaten ton from Cheteshwar Pujara vs. South Africa A, led their team to the final in the Tri-Series.

India A hammered 433 runs for the loss of just three wickets in the allotted 50 overs and South Africa A managed 394 before they were bowled out with 8 balls to spare.

The 6th match of the Tri-Series was played on Monday, August 12, 2013, at LC de Villiers Oval, Pretoria.

Earlier, the skipper of the Blue Shirts A, Cheteshwar Pujara, won the toss and opted to bat first on a flat track. Shikhar Dhawan and Murali Vijay opened the innings in style by hitting a four each in the very first over. Dhawan got three successive boundaries in the third over and repeated that four overs later whereas Vijay followed him in the 9th one. They scored 91 runs in 11 overs before Murali Vijay was caught behind by Dane Vilas off Beuran Hendricks for 40 and was replaced by Cheteshwar Pujara. The run rate was slowed down in the following six overs, Dhawan got 2 fours in the 18th one and smashed his hundred with another boundary. 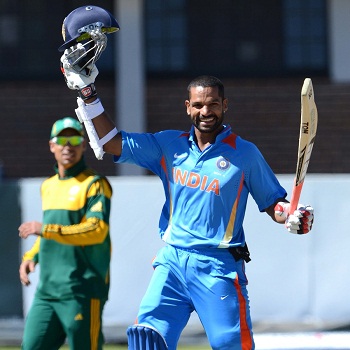 Pujara was doing fine at his end while Shikhar Dhawan hit two back to back sixes in the 28th over and never looked back after that. The latter was teasing the bowlers at will and the boundaries were sprinkling from his willow regularly. Dhawan plundered his double century in the 40th over and added another 2 sixes and 2 fours in the next two. The duo shared a mammoth partnership of 285 runs in 200 mere balls for the second wicket. Shikhar Dhawan was finally caught behind off Rusty Theron for 248 from just 150 balls with 7 towering sixes and 30 fours. The incoming batsman, Suresh Raina, was caught by Roelof van der Merwe off Hardus Viljoen for just six runs. Cheteshwar Pujara powered his hundred in the 48th over and remained unbeaten for 109 off 97 with 8 fours as India A piled up 433 with seven wickets still in hand after 50 overs.

South Africa A started their chase with Reeza Hendricks along with Rilee Rossouw and they got 56 runs in 6 overs including 3 sixes and 4 fours. Hendricks hit three back to back fours in the next over and Rossouw got the same result in the 8th one. They shared a valuable opening partnership of 121 in 12.4 overs when Rilee Rossouw was clean bowled by Shahbaz Nadeem for 43. The next wicket fell after 19 runs as Vaughn van Jaarsveld joned in with Hendricks who accomplished his ton on the first ball of the 25th over but was gone four deliveries later for 106 off just 78 with 2 sixes and 12 fours.

The captain of the South Africa A, Justin Ontong, walked in next as Jaarsveld kept on cruising at his end with continuous boundaries. Ontong became the next victim for 49 quick fired runs off 36 balls with 8 fours and the next batsman lost his wicket for two runs. Roelof van der Merwe associated with Jaarsveld who completed his century in the 45th over. Vaughn van Jaarsveld was caught by Raina  off Ishwar Pandey for 108  from just 91 balls comprising 5 giant sixes and 7 fours. Roelof van der Merve scored 36 runs as the entire innings of South Africa A team was folded back for 394 in 48.4 overs.

India A won the important match of the Tri-Series and has qualified for the final which will be played against Australia A on August 14 at the same venue.