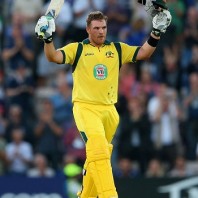 A sparkling maiden T20 century from the spicy Australian opener, Aaron Finch, murdered the hosts England as the visitors clinched the game comfortably.

The Kangaroos piled up 248 runs for the loss of six wickets in the measured 20 overs and England was restricted to 6-209 in the required quota of overs.

Aaron Finch (Australia) was announced ‘Player of the match’ for his astonishing innings of 156 off 63 mere balls with 14 juicy sixes and 11 fours.

The first Twenty20 of the two match series was played on Thursday, August 29, 2013, at The Rose Bowl, Southampton.

Earlier, Stuart Broad won the toss for the home side and invited the visitors to bat first. He got the immediate dividend when David Warner was gone for just one run when the other opener, Aaron Finch and Shaun Marsh started scoring runs. The latter was most severe on the rival bowlers and hit 3 fours in the third over which was bowled by Steven Finn. Marsh kept on securing his end while Finch was punishing the bowlers at will with sixes and fours. The duo was showering the boundaries and Aaron Finch powered his second T20 fifty on the 26th ball he faced with a grand six down the ground. 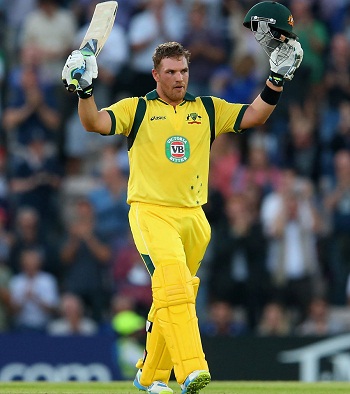 Broad handed over the ball to Joe Root in the 10th over and Finch welcomed him with three back to back sixes followed by another 2 fours. The second wicket partnership flourished for 114 runs in 55 mere balls and Shaun Marsh fell at 125 for 28 runs. Shane Watson walked in next whereas Aaron Finch blasted his maiden T20 hundred on the 47th delivery with another six over long leg. Luke Wright gave away 23 runs in the 15th over with 2 sixes from Finch and one from Watson. Aaron Finch became the highest run getter in T20 with a mighty six when he crossed the 123 runs mark. He surpassed Brendon McCullum who previously held the highest runs record in T20 with 123 scored against Bangladesh at Pallekele on September 21, 2012.

Finch minced Danny Briggs for 23 runs in the 17th over with 3 lofty sixes and 1 four. He was finally clean bowled by Jade Dernbach for 156 off just 63 balls comprising 14 towering sixes and 11 sweetly timed fours. Shane Watson followed him for 37 off 2 big sixes and 4 fours as the Kangaroos amassed 6-248 after 20 overs.

Jade Dernbach was the most successful bowler with three wickets whereas Steven Finn, Stuart Broad and Danny Briggs shared one wicket each.

Michael Lumb and Alex Hales started the chase for England in a positive manner as the first hit 3 fours in the very first over. The first wicket fell at 33 when Lumb was declared leg before wicket off Mitchell Johnson for 22 from 11 with 1 six and 3 fours. Josh Hazlewood struck twice in the next one and removed Hales and Luke Wright for 8 and 4 runs. The hosts were reeling at 4-42 in 4.3 overs when Joe Root and Ravi Bopara got together. Root was the most aggressive of the two and hit 4 fours in the coming overs and Bopara assisted him with a few of them. The batting looked easy for the pair but they were unable to dispatch the boundaries like Aaron Finch.

Joe Root reached his maiden T20 fifty in the 13th over with a four whereas his partner accumulated 12 runs on three deliveries of the next one. Ravi Bopara was caught by David Warner off Shane Watson for 45 from 29 balls with 1 six and 4 fours. Root carried on with his assault and his willow was sprinkling the boundaries regularly. He stood firm with 90 off 49 with 1 six and 13 fours as England managed 209 with four wickets still in hand in 20 overs.

Mitchell Johnson and Josh Hazlewood were the top wicket takers with two each whereas Shane Watson and James Faulkner chipped in with one wicket each.

Australia triumphed in the first Twenty20 with a margin of 39 runs and leads the two match series 1-0.The second and final T20 of the series will be played on August 31, 2013, at Riverside Ground, Chester-le-Street.