South Africa has announced its Test team against England and has retained the same side that defeated New Zealand in the three match series 1-0 in March 2011.

The first Test vs. New Zealand played at University Oval, Dunedin ended in a draw on March 11, 2012. The South Africa won the second Test by 9 wickets on March 17, 2012 played at Seddon Park, Hamilton and the third and final encounter was drawn on March 27, 2012, at Basin Reserve, Wellington.

The Proteas will play three Tests vs. England and the series will commence with the first match due to be played at Kennington Oval, London, on July 19, 2012.

Peculiar features of the series – the landmarks for Graeme Smith

1-    The skipper of South Africa, Graeme Smith, has fully recovered from his ankle injury and will be appearing in his 100th Test of the career once he enters the first match on July 19, 2012, at The Oval.

2-    Smith has led South Africa in 91 Tests and after appearing in all three Tests against England, he will surpass the record of ex- Australian Skipper, Allan Border who has captained in 93 matches.

The selectors are having a close watch of the middle order batsman, Ashwell Prince, who played his last Test against Sri Lanka at Kingsmead Durban, in December, 2011 and he managed 11 and 7 runs in two innings. Prince is currently representing Lancashire and has batted excellently in the County Championship Division One, 2012.

The 35-year-old is the second highest scorer in the championship while appearing  in 15 innings and has smashed 661 runs at an excellent average of 47.21 runs, the highest of 144 with 6 fifties.

The South African convenor of selectors, Andrew Hudson, revealed that the performance of Prince is being closely monitored and his current form can earn him the place in the national squad Test. He said,

“I would never write anybody off, so we are still watching Ashwell. It’s good to see that he has gone to England and is playing in those conditions. If he does amazing things at domestic level, he could fight for his place back.”

He was provided a chance in the third Test vs. New Zealand and he thrashed 103 runs in the first innings followed by an unbeaten 33 in the second. The selectors hailed the performance of Duminy and Hudson commented on his timely innings in New Zealand by saying,

“We were delighted that JP stepped up and performed when we needed him in New Zealand. It showed us the depth we have in that position.”

Mark Boucher will be playing his last Test series in England before he hangs his boots after playing the last Test which is scheduled to conclude on August 20, 2012, at Lord’s, London. He made his debut against Pakistan on October 17, 1997, at Sheikhupura and has been an integral part of the team eversince.

The 35-year-old wicketkeeper batsman has played 147 Tests for South Africa and grabbed 532 catches with 23 stumping. He is a competent batsman as well and has scored 5515 runs at an average of 30.30, the best of 125 with 5 hundreds and 35 fifties.

The selectors have depended on AB de Villiers to deputise him and he can keep the wickets if required.

England is ruling the world in Test cricket, South Africa is currently placed at no.2 in the ranking and the series win vs. England can place them at top spot. 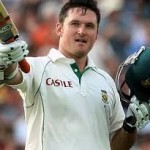 South Africa’s XI for the Tests in England