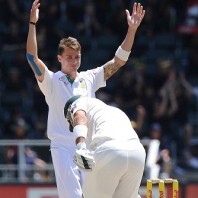 A career’s best bowling by Dale Steyn and smart wicket keeping supported by a sizzling ton from AB de Villiers let down Pakistan as South Africa won the 1st Test. 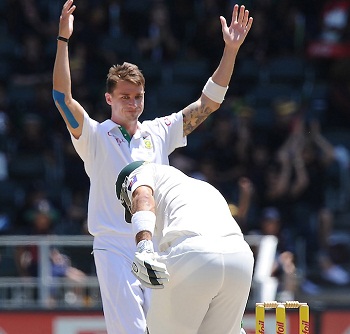 Dale Steyn – ‘Player of the match’ for his outstanding bowling

Dale Steyn (South Africa) was rightly declared ‘Player of the match’ for his hostile bowling in the game since he grabbed 11 wickets for 60 mere runs.

The first Test of the three match series concluded before the lunch interval on day four that was Monday, February 4, 2013.

Earlier, Pakistan started the day at 4-183 in 75 overs, their skipper, Misbah-ul-Haq and Asad Shafiq came to bat for 44 and 53 runs accordingly. The first over bowled by Jacques Kallis ended up as a maiden as Mibah-ul-Haq got the first four of the day in the next over. He attained his 18th Test fifty two overs later with another four as the Proteas captain, Graeme Smith, took the new ball in the 81st over. The score was taken to 209 when Dale Steyn removed Asad Shafiq for 56 runs.

Misbah-ul-Haq became the next victim of Steyn for 64 when he was caught behind by AB de Villiers with the addition of just one runs to the total. That was the beginning of the disaster for the visitors as the wickets started falling one after another. Umar Gul was the only batsman who showed some resistance by scoring 23 runs as the rest of the tail order batsmen just completed their visit to the crease.

Saeed Ajmal was the 8th batsman who surrendered for 11 as AB de Villiers snatched his 11th catch in the game behind the stumps. He equalled the record of Jack Russell (England) which was achieved at the same venue in 1995. Russell sent 11 batsmen back to the pavilion by grasping their catches behind the woods in the second Test against South Africa that was played on November 30, December, 1, 2, 3 and 4, at Johannesburg.  AB de Villiers achieved a unique distinction in the match vs. Pakistan by becoming the only wicketkeeper who scored a century and held 11 catches.

The entire Pakistani team went back to the dressing room for 268 runs after consuming 100.4 overs and that was a rather better result than the first innings.

Dale Steyn once again was unplayable, he clinched five wickets and enhanced his match tally to 11. Vernon Philander and Morne Morkel shared two wickets each whereas Jacques Kallis held one.

South Africa won the match convincingly by a huge margin of 211 runs and leads the three match series 1-0. The second Test will commence from February 14, 2013, at Newlands, Cape Town.