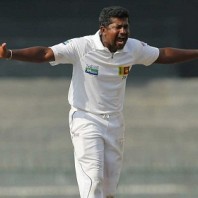 Rangana Herath assisted the Lankan Lions to take command in the 2nd Test by grabbing the wickets of three top order batsmen of the Bengal Tigers on day three.

The first innings of the visitors was folded back for 240 runs and they scored 4-158 in the second after consuming 69 overs. The hosts thrashed 346 runs in the first innings in 111.3 overs with tons from Kumar Sangakkara and Dinesh Chandimal.

Earlier, the Islanders initiated the day at 6-294 in 93 overs whereas Kumar Sangakkara and Nuwan Kulasekara were at the crease with 127 and 2 runs respectively. The batsmen started off slowly and Kulasekara hit the first four of the day in the 98th over as Sangakkara responded with another in the next over. Kumar Sangakkara was caught behind by the Bangladesh skipper, Mushfiqur Rahim off Abul Hasan for 139 scored from 289 balls with 11 fours. The seventh wicket fell at 316 as the rival bowlers took charge of the game and the wickets kept on sliding at regular intervals.Nuwan Kulasekara was the ninth batsman to be dismissed at 346 and the final wicket fell at the same score in 111.3 overs.

Sohag Gazi was the top wicket taker with three, Robiul Islam, Abul Hasan and Rubel Hossain shared two each whereas Mahmudullah chipped in with one wicket.

Bangladesh conceded a first innings lead of 106 runs and their second innings was opened by Tamim Iqbal along with Juhurul Islam. They saw off the first seven overs quietly before lunch interval by scoring 23 runs with one four from each of the two batsmen. The duo kept on crawling after the break as Tamim Iqbal was the most flourishing of the two and hit four boundaries until the 16th over as compared to just one from his partner.

The pair dispatched one six each in the 21st over as Tamim Iqbal achieved his 12th Test fifty on the third ball of the following over. They kept on playing watchfully and enhanced the score to 91 when Tamim Iqbal was clean bowled by Shaminda Eranga for 59 off 107 balls with 1 six and 4 fours. Mohammad Ashraful was unable to impress and lost his wicket for just four after the addition of five runs to the total. Mominul Haque entered the park next as the first hundred of the innings was displayed on board in the 44th over. 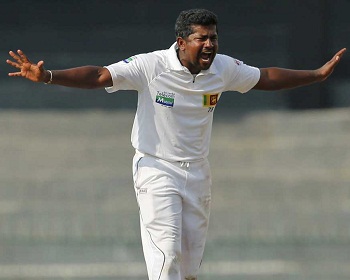 The boundaries were dried up as Mominul Haque found one in the 50th over followed by another, four overs later. The second wicket partnership added 47 runs for the third wicket and the score card exhibited 143 in 59 overs. Rangana Herath struck twice in the next over and removed Juhurul Islam for 48 off 170 with just 1 six and 1 four on the third delivery of the 60th over. Herath penetrated through the defence of the next batsman Mahmudullah and broke his stumps on the very next ball for a duck.

Mushfiqur Rahim walked in next as Mominul Haque was dropped at 30 by Kulasekara at mid-off and Herath was deprived from another wicket. The visitors survived a few anxious moments at the crease but most importantly without losing any further wicket. The score touched 158 for the loss of four wickets in 69 overs whereas Mominul secured his end after scoring 36 and Mushfiqur Rahim was at the other side for 7 runs.

Rangana Herath was the most successful bowler with three wickets whereas Shaminda Eranga claimed one.

Bangladesh has gained a nominal lead of 52 runs and their incoming batsmen have to play well on the fourth day otherwise, Sri Lanka can clinch the encounter. 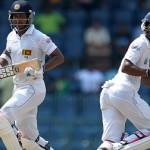