New Zealand struggled against the devastating off spin bowling from the rising international star, Sunil Narine who won the match for West Indies.

West Indies scored 241 runs for the loss of nine wickets in the allotted 50 overs and the innings of New Zealand was rolled back for 221 runs in the required quota of overs.

Sunil Narine (West Indies) was declared ‘Player of the match’ for his magical bowling spell of 5-27 in 10 overs. He was announced ‘Player of the series’ as well since he was the top wicket taker by grabbing 13 wickets at an awesome average of 11.23 with the best of 5-27.

The fifth and final One Day International was played on Monday, July 16, 2012, at Warner Park, Basseterre, St Kitts.

Earlier, Darren Sammy, the captain of West Indies, won the toss and opted to bat first. Their top three batsmen were unable to impress against the deadly pace bowling of the Black Caps and the home team was struggling at 3-37 in 8.2 overs. Marlon Samuels and Dwayne Bravo lifted their side with concentration while securing their ends and the score board was kept moving as well.

The first fifty of the innings was attained in the 13th over and the two batsmen gathered 11 runs in the 15th over with one six and one four. Samuels scored at a superior rate as compared to Bravo who was dropped on the third ball of the 22nd over by the bowler Andrew Ellis off his own bowling at 14. The fourth wicket produced 60 runs as Marlon Samuels was gone for 43 off 59 balls with 1 six and 3 fours.

Dwayne Bravo kept on crawling as the wickets were on slide from the other end and he added 10 runs in the 33rd over with one six and an even four. He completed his fifty in the 42nd over and became the 8th victim at 180 in 43.1 overs after scoring 53 off 93 deliveries with 1 six and 3 fours.

Andre Russell took over from there, punished the Kiwi bowlers at will and the boundaries were sprinkling from his bat. He dispatched 24 runs in the over no.45 and 46 with the assistance of 3 sixes and 1 four while thrashing his fifty in the 48th over. Russell remained unbeaten for 59 from just 40 balls with 3 towering sixes and 6 fours as West Indies hammered 241 runs with one wicket in hand.

Kyle Mills and Tim Southee were the major destructors with three wickets each, Andrew Ellis held two whereas Kane Williamson claimed one wicket.

New Zealand suffered an early blow by losing their first wicket for two mere runs when Brendon McCullum joined in with Martin Guptill. The first opted for attack and got a couple of fours in the third over and the latter joined him with two sixes in the successive overs. The pace of scoring was kept alive and the initial fifty of the innings was attained in the 8th over. They took the score to 64 in 11.5 overs when McCullum was caught in the slip by Darren Sammy off Sunil Narine for 33 runs.

Narine struck again after the visitors added 13 runs in the total as Martin Guptill was declared leg before wicket for 33. The skipper of Black Caps, Ross Taylor and Kane Williamson joined together in the centre and the first tried to threaten the bowlers with a few boundaries. They accumulated 31 runs, enhanced the score to 108 when Taylor lost his wicket for 28 and the fifth wicket was gone just after one run.

The Kiwis were reeling at 6-140 in 34.5 overs as Andrew Ellis came in the park and associated with the solid looking Williamson. The run rate was steadied and Kane Williamson achieved his fifty in the 41st over.

The seventh wicket associated 68 runs as Kane Williamson was caught smartly at midwicket by Chris Gayle off Narine for 69 from 84 balls with 1 six and 5 fours. The chances of New Zealand faded away with the departure of Williamson as Sunil Narine continued with his lethal bowling spell.

New Zealand was bowled out for 221 runs on the last ball of the 50th over when Kieron Pollard held the catch of Trent Boult on the bowling of Dwayne Bravo for 5 runs.

Sunil Narine was the star performer with five wickets, Tino Best and Bravo held two each whereas Marlon Samuels chipped in with one wicket.

West Indies won the fifth and final match by a margin of 20 runs and clinched the series 4-1 convincingly. 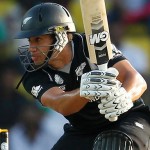