Chris Gayle toyed with the New Zealand bowling with a powerful fifty and Sunil Narine broke the back of their batting as West Indies won the 2nd T20 in style.

West Indies piled up 177 runs with five wickets in hand at the end of the scheduled 20 overs and the innings of New Zealand was folded back for 116 runs with 8 balls to spare.

Sunil Narine (West Indies) was declared ‘Player of the match’ for his excellent bowling spell of 4-12 in the allotted four overs.

Earlier, the captain of the Windies, Darren Sammy, won the toss and elected to bat on a good looking batting strip. They lost the first wicket for 14 runs when Johnson Charles joined together with Chris Gayle who was in a defensive mood in the initial parts of the innings. Charles started off well by dispatching back to back fours in the second over and surprisingly, Gayle negotiated the entire third over from Kyle Mills without scoring any run.

Gayle opened his account with a single on the seventh ball he faced and hit the first four on the 11th ball of his innings as Charles was scoring at a superior rate. The duo punished Doug Bracewell for 18 runs in the 8th over with 2 sixes and 1 four and lifted the score to 78 after 10 overs. Johnson Charles was gone after scoring 36 off 32 balls with 1 six and 4 fours and the second wicket fell at 86 runs.

Gayle came into his own in the 13th over and accumulated 16 runs with two grand sixes and one four and also completed his fifty. He was the third batsman who went back to the pavilion for 53 scored off just 39 deliveries which comprised 4 mighty sixes and 3 fours. Dwayne Bravo held the innings together in a herculean style and hammered unbeaten 35 off 11 mere balls with the assistance of 4 towering sixes and 1 four. West Indies smashed 177 runs for the loss of five wickets at the end of the 20th over.

Nathan McCullum was the chief wicket taker with two whereas Bracewell, Tim Southee and Rob Nicol shared one wicket each.

New Zealand initiated the innings with Rob Nicol and Martin Guptill who gave them a reasonable beginning by contributing 26 runs in 4.5 overs when the later was gone for 18. That was the start of the disaster for the Kiwis and they were reeling at 5-43 in 8.5 overs as the Caribbean bowlers took over.

Daniel Flynn and Tom Latham tried to defend as the first was the most aggressive of the two and gathered a couple of sixes in the process. The sixth wicket partnership assembled 26 runs when Flynn was caught by Gayle off Marlon Samuels for 22 runs. Latham became the next victim at 85 after his personal contribution of 19 runs and the wickets kept on sliding one after another.

Sunil Narine was the star performer and grabbed four wickets, Dwayne Bravo and Marlon Samuels held two each as Samuel Badree got one wicket. 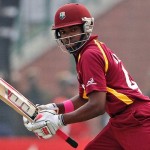