A maiden double century from the supreme batsman of New Zealand, Ross Taylor, put his team on top while West Indies lost two quick wickets in their 1st innings.

The Kiwis amassed 609 for the loss of nine wickets when their first innings was declared by Brendon McCullum and the Caribbeans scored 2-67.

The second day of the first Test came to an end on Wednesday, December 4, 2013, at University Oval, Dunedin.

Earlier, the home side commenced their first innings at 3-367 in 90 overs whereas Brendon McCullum and Ross Taylor were batting at 109 and 103. The latter was gone for 113 and the next wicket fell at 385 when BJ Watling associated with Taylor. Watling survived a review at 10 whereas Taylor was dropped at 132 by Kieran Powell off Shane Shillingford.

The partnership was broken at 469 when BJ Watling lost his wicket for 41. The hosts continued piling up runs on board with little partnerships and Taylor hit 18 runs in the 133rd over off Shannon Gabriel with 4 fours. He blasted his first Test double hundred in the 145th one while Ish Sodhi and Neil Wagner provided valuable associations with him by scoring 35 and 37 runs. Ross Taylor secured his end for 217 off 319 balls with 23 fours as the innings of the Black Caps was declared at 9-609 after 153.1 overs.

Tino Best was the highest wicket taker with three, Darren Sammy and Narsingh Deonarine held two each whereas Shane Shillingford got one.

The Windies lost their openers at 24 when Marlon Samuels joined in with Darren Bravo in a critical situation. The duo did not make any mistake until the close of the second day’s play and remained unbeaten at 14 and 37 respectively. The visitors managed 67 runs for the loss of two wickets after negotiating 24 overs whereas Trent Boult and Tim Southee chipped in with one wicket each.

West Indies still requires another 542 runs to clear the first innings deficit piled up by New Zealand who is at the driving seat. 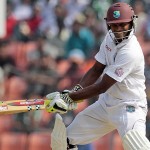