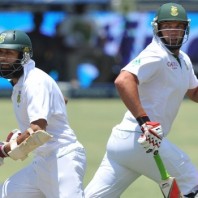 The South African top order batsmen led by Hashim Amla and Jacques Kallis exploited the conditions in the opening Test as the Australian bowling looked ordinary.

South Africa hammered 255 runs for the loss of just two wickets as Amla and Kallis were cruising towards another ton of their careers. 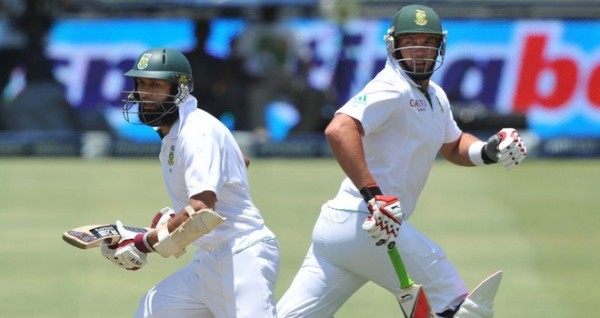 Earlier, the Proteas captain, Graeme Smith won the toss and came out to bat with Alviro Petersen in a typical test mode. They did not rush for quick scoring and the later hit the first four of the innings in the sixth over as Smith remained calm at the other end. They took the score to 29 at the end of the 10th over and Smith was declared leg before wicket off James Pattinson on review for 10 runs.

One of the best batsmen in the cricket world, Hashim Amla, joined in next with Petersen and started stabilising the innings. Amla hit the first six of the innings to Nathan Lyon in the 20th over and the run rate was enhanced. Lunch was taken after 27 overs as the visitors compiled 90 runs. Petersen and Amla were at the crease with 45 and 29 runs respectively.

The batsmen found it difficult to score the runs freely after lunch interval and the Kangaroo bowlers delivered few maiden overs in the process. Alviro Petersen attained his fourth Test fifty in the 33rd over and the first hundred of the innings appeared on board as well. The second wicket partnership added 90 runs and lifted the score to 119 when Petersen was caught by Michael Hussey at mid-on at the bowling of Lyon on the fourth ball of the 39th over for 64 off 127 balls with 7 fours.

The most compatible middle order batsman of the Proteas, Jacques Kallis, dropped in the centre next as Hashim Amla reached his 24th Test fifty in the 48th over. The 50th over produced 11 runs with 1 six and 1 four as Kallis was caught in the 56th over off Peter Siddle but the delivery was declared as a no ball after referral by the field umpire Asad Rauf. Jacques Kallis reached his 56th Test fifty with a four in the 61st over as Amla kept on accumulating the runs from the other end.

Hashim Amla was dropped by Siddle on his own bowling at 74 in the very next over which can prove costly in the end. The Australian bowlers bowled at a tight line and length, delivered three consecutive maiden overs from over no. 72 but were unable to get a breakthrough. South Africa plundered 255 runs with eight wickets in hand at the end of the 82nd  overs when the first day’s play concluded. Hashim Amla was 10 runs short of his 17th Test ton whereas Jacques Kaliis required 16 more runs to achieve his 44th century in the longer version of the game.

South Africa is in a commanding position and with a plenty of batting still to come, they will find themselves at a dictating position. The Australians have to clinch quick wickets on the second day to come back in the game before it is too late for them.