Dean Elgar led South Africa with a masterly knock whereas a couple of fifties from the middle order batsmen strengthened the position of the home side.

The hosts reached 214 for the loss of five wickets after utilising 83 overs.

Earlier, Graeme Smith, the skipper of the Proteas, won the toss and went into bat first. The decision bounced back when he was gone for 9 and Hashim Amla was dismissed for a duck. Faf du Plessis along with Dean Elgar survived a few anxious moments in the center but they kept on crawling and reached 64 at lunch interval. The duo picked up the run rate after break and du Plessis achieved his third Test fifty with a couple of boundaries.

Elger followed his partner, he attained his half century with confidence and the score was taken to 123 in 43.1 overs. Faf du Plessis was caught by Steven Smith at short leg off Nathan Lyon for 55. The in form batsman, AB de Villiers, walked in next and was finding no problem in tackling the rival bowling. The duo survived a run out chance and took the score to 181 when Dean Elgar became the next victim for 83.

The debutant, Quinton de Kock, added problems for the home side and lost his wicket for just seven runs. AB de Villiers went past his 36th Test fifty and remained unbeaten for 51, Jean-Paul Duminy was at the other end for two as their team scored 5-214 in 83 overs.

Nathan Lyon was the most successful bowler with two wickets whereas Ryan Harris, Mitchell Johnson and Steven Smith shared one wicket each.

The match is evenly poised at the moment and an addition of 100-150 runs to the total can stabilise the position of South Africa. 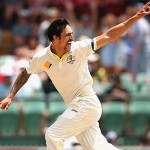