A classic century by the top order batsman, Phillip Hughes, assisted by a disciplined bowling helped Australia to win the 5th ODI and level the series.

Australia scored 247 runs for the loss of five wickets in the measured quota of 50 overs and the innings of Sri Lanka was folded back for 215 in 48.3 overs.

Phillip Hughes (Australia) was declared ‘Player of the match’ for his brave unbeaten innings of 138 from 154 balls.

Nuwan Kulasekara (Sri Lanka) was declared ‘Player of the series’ for his outstanding bowling. He was the highest wicket taker from either side by grabbing 11 wickets at an excellent average of 16.90 runs per wicket with the best of 5-22.

The fifth and final One Day International of the series was played on Wednesday, January 23, 2013, at Bellerive Oval, Hobart.

Earlier, Mahela Jayawardene, the captain of Sri Lanka, won the toss, invited Australia to bat first and surprisingly, Tillakaratne Dilshan started the bowling for the visitors. The Kangaroos opened their innings with Matthew Wade and David Warner as Dilshan ended his first two overs as a maiden. Wade hit 2 fours in his third over and was gone after contributing 23 runs as the score reached 31 in 6.4 overs. The promising youngster, Phillip Hughes, got together with Warner who was clean bowled by Dilshan for 10 runs after the addition of six runs to the total.

The Australian skipper, George Bailey came in next and tried to consolidate the innings with Hughes with a lot of care. The run rate slowed down since the first 20 overs produced just 62 runs and most of the scoring was conducted by Hughes. The score was enhanced to 97 when Bailey was caught and bowled by Thisara Perera for 17 runs and he was replaced by David Hussey. Phillip Hughes scored his fifty in the 30th over with a four as Hussey got his first four on the 16th ball he faced.

Hughes hit two back to back fours in the 39th over and thrashed his second ODI hundred on the first ball of the 43rd over with a four. David Hussey was run out on the last ball of the over for 34 off 39 balls with just one four. Phillip Hughes remained unbeaten with a majestic knock of 138 off 154 deliveries with 1 six and 13 fours as the hosts smashed 247 runs with half of their side back in the pavilion.

The experienced duo of Mahela Jayawardene and Dilshan started off for the Lankan Lions and collected 13 runs in the first four overs. Jayawardene dispatched 3 fours in the next over of Clint McKay and hit a couple of more in the next few overs as Dilshan remained silent at his end. Jayawardene was caught at mid on by Mitchell Starc off Xavier Doherty for 38 from 39 with 6 fours. The first wicket was lost at 57 and the next three wickets were gone after the addition of just 20 runs.

Angelo Mathews and Kushal Perera joined together after 20.4 overs but were unable to hit even a single four in the next seven overs. Perera got the first four of his innings in the 29th over and the first hundred of the innings was displayed on board in the 30th over. Perera became the next victim at 108 after he had scored 14 runs. Jeeva Mendis walked in next as Mathews discovered his first four on the 51st ball he faced. The pair started picking up the boundaries after the 36th over at regular intervals and they accumulated 11 runs in the 40th over with 2 fours.

Angelo Mathews attained his 12th ODI half century in the next over with a four and hit another 2 fours in the 42nd over. Mendis got the first six of the innings in the following over and was clean bowled by Moises Henriques for 26 runs as the total touched 187 runs. Mathews was caught by George Bailey off Mitchell Johnson for 67 scored from 79 balls comprising 7 fours without any addition to the score. The tail was wiped off quickly by the Aussie bowlers and the entire Islanders team was bowled out for 215 runs with 9 balls to spare.

Xavier Doherty and Moises Henriques were the supreme bowlers with three wickets each whereas Clint McKay and Mitchell Johnson shared two wickets each.

Australia won the fifth and final ODI easily by 32 runs and the five match series was levelled at 2-2. 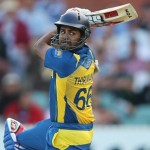