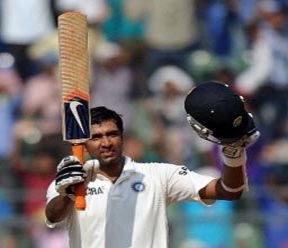 Virender Sehwag, who took over the Captaincy for the Five One Day International against the visiting West Indies was pleased with the performance of young all rounder Ravichandran Ashwin in the recently concluded Test series.

Ashwin was knocking the doors of Test cricket since couple of years as he was giving consistent performance at domestic level, ODIs and T20s.

The youngster was awarded Test cap in the first Test at Feroz Shah Kotla,Delhi, on November 6, 2011 and he executed perfectly in the match by mesmerizing the rival batsmen.

He got nine wickets in the match and was rightly selected as ‘Player of the match’ which India won by five wickets.

The 25-year old played an important role in the third Test at Wenkhede Stadium, Mumbai which ended in a nail biting tied match on November 26, 2011.

The Carribeans piled up a massive total of 590 runs in their first inning before they were bowled out through the courtesy of a magnificent 166 runs by Darren Bravo and five fifties from their competent batsmen.

Indiawas restricted to 331 runs after losing their six top order batsmen and looked like conceding a huge lead when Ashwin came in to bat.

The all rounder changed the complexion of the game single handed with his attacking batting and thrashed his maiden century in the process.

He scored 103 runs in 118 deliveries with the assistance of two sixes and 15 fours while punishing all front line bowlers ofWest Indies.

Indiamanaged to score 482 runs as their innings was folded back finally in 135.4 overs.

West Indies faced tough time in their second innings and were bowled out for mere 134 runs in 57.2 overs and they were unable to cope with the spin attack of India.

Indiawas required to score 243 runs to win the third Test and claim a white wash.

They were cruising well towards victory before the sixth wicket was lost at 189 runs when Ashwin came in to bat and joined with Virat Kohli who was playing well at the other end.

Kohli was the next batsman who went back to the pavilion after scoring 63 runs at the total of 224 runs.

Indiastill needed 19 runs and three wickets were required by the Windies to win the match which was evenly poised.

Ashwin stayed at the crease until the last ball was bowled and was in fact, ran himself out while trying to steal the winning run.

Indiascored exact 242 runs and the match was tied due to the superb efforts of Ashwin in the final overs.

He was the highest wicket taker forIndiain the series with 22 wickets, was declared ‘Man of the match’ and more deservingly ‘Man of the series’.

Ashwin was selected for ‘Dilip Sardesai Award’ which was very encouraging for him and Sehwag extended his best wishes for the all rounder as,

“May he get more awards in future. When you get award from the government that’s the biggest achievement. Getting a national award like Arjuna or Padma awards is the biggest achievement for a sportsperson.I hope in coming years he performs well. I am sure that Ashwin will get those also. It’s really good for him. I am really happy for Ashwin because he has performed really well. It’s good that his performance is appreciated by the BCCI.”