A match winning maiden five wickets haul in the second innings by Tino Best led West Indies to an astonishing win in the opening match of the two Test series.

West Indies piled up 527 runs in their first innings for the loss of four wickets when the innings was declared by Darren Sammy and was followed by 273 in their second innings. Bangladesh responded well by powering 556 runs in the first innings but was crushed to 167 on the final day of the Test.

Kieran Powell (West Indies) was declared ‘Player of the match’ for his magnificent batting in the game as he thrashed a century in each innings.

The first Test came to an end on Saturday, November 17, 2012, at Shere Bangla National Stadium, Mirpur.

Earlier, the Windies started the fifth day at 6-244 scored in 64.5 overs and Darren Sammy was unbeaten on 15 runs. Sunil Narine walked in the centre with his skipper who was declared leg before wicket for 16 off Sohag Gazi for 16. Narine took over and hit a six in the 69th over as Sohag Gazi clinched two wickets on the consecutive deliveries of the 73rd over. Sunil Narine remained unbeaten for 22 off 29 balls with 1 six and 2 fours as West Indies lost their last wicket at 273 in 74.2 overs.

Sohag Gazi was the star performer with the ball by grasping 6-74 and he clinched 9 wickets haul in his maiden Test whereas Rubel Hossain and Shakib Al Hasan claimed two wickets each.

The Bengal Tigers required 245 to win the match but lost their prominent opener, Tamim Iqbal, for just five runs. Shahriar Nafees joined in with Junaid Siddique and they reached 27 after the first 10 overs. Junaid Siddique became the first victim of Tino Best when he was caught behind by Denesh Ramdin at 44 after contributing 20 runs. The centurion in the first innings, Naeem Islam, came in the centre next as Shahriar Nafees was caught and bowled by Best on the last ball of the 19th over for 23.

Naeem Islam held his end with determination as the middle order batting of the home side collapsed and they were reeling at 5-85 in 30.4 overs. He was the sixth batsman who went back to the dressing room for 26 and Nasir Hossain was clean bowled by Veerasammy Permaul at his personal contribution of 21 runs. Mahmudullah and Sohaib Gazi resisted in the lower order and enhanced the score to 155 when the latter was gone for 19 runs.

Tino Best broke the stumps of Mahmudullah for 29 and grabbed five maiden wickets as the innings of Bangladesh was folded back at 167 in 54.3 overs. Veerasammy Permaul held three whereas Ravi Rampaul got two wickets.

West Indies won the interesting match by a good margin of 77 runs and leads the two Test series 1-0. The second Test will commence from November 21, 2012, at Sheikh Abu Naser Stadium, Khulna. 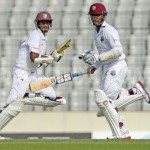