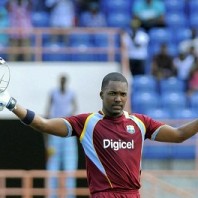 Darren Bravo played a responsible match winning knock supported by Kieran Powell and superb bowling by their bowlers led Windies to an easy win vs. Zimbabwe.

Zimbabwe scored 211 runs for the loss of 9 wickets in their stipulated quota of 50 overs. West Indies chased the target successfully by smashing 215 runs with five wickets in hand in 46.2 overs. 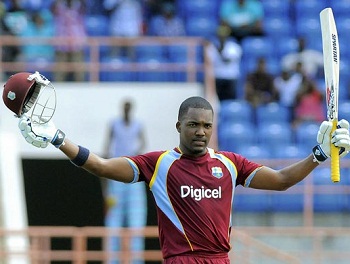 The third and final One Day International of the series was played on Tuesday, February 26, 2013, at National Cricket Stadium, St George’s, Grenada.

Earlier, Brendan Taylor, the captain of Zimbabwe, won the toss, he opted to bat first and the innings was opened by Tino Mawoyo along with Vusi Sibanda. The proceeding was slow and they scored just 23 runs in the first 9 overs without getting a single boundary. Mawoyo was declared leg before wicket off Sunil Narine on the first ball of the next over for 9 runs. Hamilton Masakadza came in next and hit the first four of the innings in the 11th over but was gone two overs later for six runs.

Taylor walked in next as Sibanda hit a couple of fours in the following overs and added another 11 runs in the 17th with 1 six and 1 four. Taylor assisted him well by gathering 3 fours and 1 six and they took the score to 85 when Vusi Sibanda was caught by Narsingh Deonarine at mid-off at the bowling of Tino Best for 41 from 60 deliveries with 1 six and 3 fours. Taylor became the next victim at 104 after contributing 39 off 38 with 2 sixes and 3 fours and the following two wickets fell as the score reached 139 in 36.3 overs.

Chamu Chibhabha took over and kept on crawling with odd boundaries as the wickets were sliding from the other end at regular intervals. He opened up in the last four overs by hitting 2 sixes and 1 four and remained unbeaten for 48 off 62 balls as the visitors managed 211 runs with one wicket remaining in 50 overs.

The Windies got off to a reasonable start with Kieran Powell and Ramnaresh Sarwan and they reached 31 after the initial eight overs. Powell hit two consecutive fours in the next over and they added another 15 runs until the second ball of the 12th over was bowled. Sarwan was caught and bowled by Tinotenda Mutombodzi for 19 and was replaced by Darren Bravo. The run rate was slowed down a bit and the pair enhanced the score to 55 after 16 overs.

The two batsmen started finding boundaries regularly after that and the total touched 83 in 21.4 overs when Kieran Powell became the second victim for 42 off 52 balls with 5 fours. Narsingh Deonarine joined in with Darren Dravo as the score went past the hundred runs mark in the 26th over. The third wicket partnership added 37 runs and the wicket fell at 120 in 31 overs as Deonarine was gone for 21 runs. Kieron Pollard was run out after the addition of just one run for a duck which brought in the field, the Caribbeans skipper Dwayne Bravo. The latter hit 1 six and 1 four in the next two overs as Darren Bravo dispatched his 9th ODI fifty with a four in the 38th over.

The hosts required 47 runs to win the match from 72 deliveries as Dwayne Bravo was caught by Hamilton Masakadza off Kyle Jarvis for 26 runs. Denesh Ramdin associated next with Darren Bravo and the pair kept on cruising without taking any risk. Ramdin hit the winning four on the second ball of the 47th over as 215 runs were posted on the score board. Darren Bravo was at the crease for 72 off 103 with 5 fours and Denesh Ramdin held his end for 24 runs.

Tinotenda Mutombodzi was the top wicket taker on his debut with two whereas Kyle Jarvis and Hamilton Masakadza shared one wicket each.

West Indies won the third and final One Day International by a good margin of five wickets and won the series 3-0. 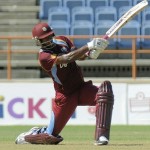 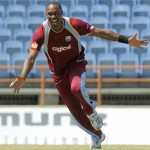