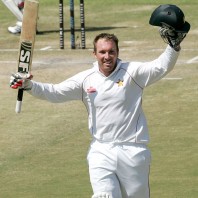 Brendan Taylor plundered tons in the consecutive innings of the first Test as Zimbabwe humiliated Bangladesh by a huge margin on the fourth day of the 1st Test.

Zimbabwe hammered 389 runs in their first innings and declared the second at 7-227 after playing 64 overs. The Bangladeshi batsmen surrendered in both innings and were dismissed for 134 and 147 runs in two innings respectively.

Brendan Taylor (Zimbabwe) was declared ‘Player of the match’ for his majestic batting while smashing two centuries in the game.

The first Test of the two match series concluded on Saturday, April 20, 2013, at Harare Sports Club. 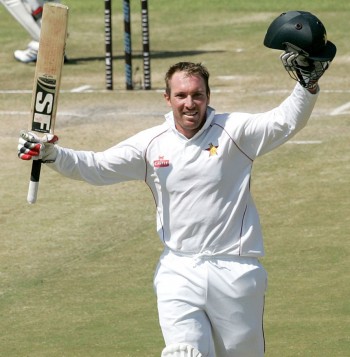 Brendan Taylor – Century in each innings

Earlier, the hosts started the fourth day at 7-187 in 56 overs whereas the captain of Zimbabwe, Brendan Taylor, was batting at 81 supported by Keegan Meth at 13. The first hit 1 six and 1 four in the 59th over as Meth carried on getting the boundaries at the other end. Taylor smashed his back to back hundred in the match on the fourth delivery of the 64th over. He declared the second innings at 227 without any further loss and set a target of 483 for the visitors to win the match with plenty of time left in it.

Robiul Islam was the only wicket taker who grabbed six wickets for 71 runs whereas one player was run out.

Jahurul Islam and Shahriar Nafees started off the chase for Bangladesh and reached 13 after the first six overs. The latter hit 2 fours in the next over but was clean bowled on the last ball by Kyle Jarvis for 11 runs. Mohammad Ashraful got together with Jahurul Islam who added a couple of fours in the following overs. The score reached 41 as Juhurul Islam lost his wicket for 22 and was replaced by Mahmudullah who preferred to play his shots and kept on adding the boundaries.

Mahmudullah added 3 fours in the 19th over and the score was enhanced to 77 after 22.4 overs when he was gone for 21 runs. The two incoming batsmen were dismissed cheaply and the Bengal Tigers were in deep trouble at 5-85 as Nasir Hossain associated with Mohammad Ashraful. The run rate was contained by the rival bowlers as the batsmen opted to bat defensively. The hundred of the innings was posted on board in the 32nd over and the duo crept to 132 in 41 overs when Mohammad Ashraful ran himself out for 40 off 105 deliveries with 5 fours.

Nasir Hossain became the next victim four runs later for 23 from 41 with 2 fours. The next four wickets fell within 11 runs and the entire Bangladesh team was bowled out for 147 runs in 49.2 overs.

Graeme Cremer was the highest wicket taker with four, Kyle Jarvis took three whereas Shingi Masakadza and Elton Chigumbura shared one wicket each.

Zimbabwe won the first Test with a hefty margin of 335 runs and leads the two match series 1-0. 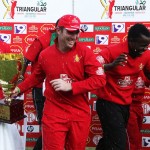 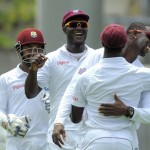