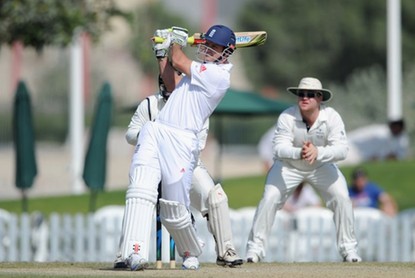 England made a fair start in preparation with the forthcoming three Test series against Pakistan after winning the warm up match vs. ICC Combined Associate and Affiliate XI by three wickets at Dubai.

The ICC Combined associate and Affiliate XI was bowled out at 281 runs in 83.3 overs, Christi Viljoen top scored with 98 runs as Stuart Broad was the highest wicket taker for England with four wickets.

England declared their first innings at 185 runs for the loss of eight wickets in 55 overs. Hamid Hussain, Mohammad Nabi and Byod Rankin shared two wickets each from the rival team.

The ICC Combined associate and Affiliate XI, declared their second innings at 164 runs after losing nine wickets, Broad once again was the chief wicket taker with three wickets.

England achieved the target by scoring 261 runs after losing seven wickets in 60.1 overs and won the match by three wickets.

Mohammad Shahzad was declared ‘Player of the match’ for his solid performance with the bat in both innings.
Earlier ICC Combined Associate and Affiliate XI, started their innings on the third and final day at 90 for the loss of five wickets in 37 overs. Shahzad and Mohammad Nabi were unbeaten on 34 and nine runs respectively after an early blow of three down for mere eight runs.

England got rid of Nabi in the 5th over of the day when Alastair Cook caught him off Broad on 13 runs. The sixth wicket fell at 101 runs and the next batsman was gone after the addition of 18 runs before Majid Haq joined in with Shahzad. The duo shared 43 runs partnership for the eighth wicket when Shahzad was gone at his individual score of 74 runs. Haq remained unbeaten on 26 as the innings was declared at 164 runs for the loss of nine wickets.

England required 260 runs for the victory and they started well with their Captain Andrew Strauss and Cook. The duo provided quick fired 63 runs for the first wicket in 11.2 overs as Cook lost his wicket after scoring 26 runs. The second wicket association between Strauss and Jonathan Trott accumulated 70 runs as earlier became victim at his personal contribution of 78 runs. Pietersen went back to the pavilion after the total was enhanced by three runs but the middle order batsmen maintained the winning tempo though few wickets fell in between.

England chased the target in 60.1 overs after scoring 261 runs for the loss of seven wickets, Steve Davies remained unbeaten on 37 runs as Ian Bell and Broad scored 39 and 31 runs respectively.

England won the match by three wickets and has initiated the tour on a positive note.