A heroic knock of unbeaten 115 runs from the master blaster Younis Khan placed Pakistan in the driving seat on the second day of the third and final Test against the visiting England team. 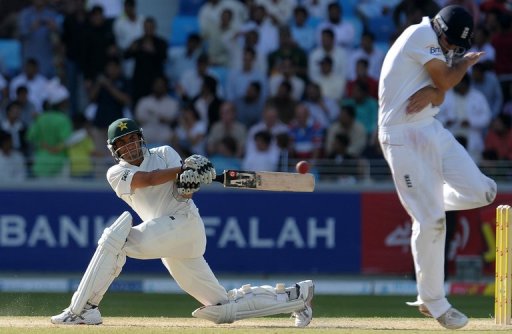 Pakistan was bowled out on mere 99 runs in the first innings and their spinning duo of Abdur Rehman and Saeed Ajmal brought them back in the game by sharing eight wickets between them while folding the innings of England at 141 runs.
England took a first innings lead of 42 runs and Pakistan cemented their position by thrashing 222 runs for the loss of just two wickets in their second innings.

The second day’s play concluded at Dubai International Cricket Stadium, on February 4, 2012 and the match was heading towards a definite decision.

Earlier England started their innings at 104 runs in 43 overs after losing six of their top order batsmen. Andrew Strauss and James Anderson were at the crease with 41 and three runs respectively. Pakistan got the initial breakthrough on the last ball of the first over when Anderson was bowled by Rehman for four runs.

Strauss achieved his fighting 50 on the third ball of the 50th over as the wickets kept on crumbling at the other end. He was the ninth batsman who went back to the pavilion while trying to go for a big shot. Adnan Akmal stumped him smartly off Rehman again for 56 runs as England’s innings came to an end on 141 runs.

Rehman was the wrecker in chief for Pakistan by grabbing five wickets, Ajmal got three and Umar Gul claimed two wickets.

England secured a first innings lead of 42 runs which looked very reasonable at that time.

Pakistan opened their second innings in a timid way and their openers Mohammad Hafeez and Taufeeq Umar were unable to score in the first three overs. The poor form of Taufeeq continued when he edged a ball off Anderson and Strauss made no mistake in the slips. He scored just six runs as the first wicket was down on 16 runs when the youngster Azhar Ali came to the crease.

Hafeez tried to put the pressure off and smashed a six and a four in the 10th over bowled by Monty Panesar but gifted his wicket on the last ball while trying to send the ball out of fence and was declared leg before wicket for 21 runs.

Pakistan was in dire trouble when the experienced Younis walked into the centre and joined with Azhar. The duo crafted the innings cautiously but opened up later and consolidated the innings. First hundred of the innings was achieved in the 47th over and Younis got his 50 in the 49th over.

Younis took complete charge of the situation and executed his shots all around the ground and was being well supported by Azhar who kept the score board moving from the other end.

Younis earned the honours of becoming the first batsman from either side to smash a century in the series in the 72nd over. It was his 20th Test ton which was applauded by the former greats of India, Sunil Gavaskar and Kapil Dev in the stands other than his team mates, officials and the crowd present in the stadium.

Pakistan was in strong position at stumps on the second day for 222 runs with eight second inning wickets still in hand. Younis was still at the crease for 115 runs and Azhar was creeping towards his second Test hundred on unbeaten 75 runs. They have gained an overall lead of 180 runs and are favourite to win the third Test, keeping in view their spin bowling strength. 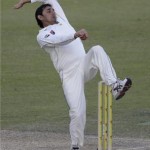