The Sri Lankans were under threat of losing the first Test Against South Africa after conceding a first innings lead of 209 runs which will be added with few more runs on the third day.

Earlier the Proteas Captain Graeme Smith won the toss on the first day and invited the Lankan Lions for batting. Their poor form with the bat continued and the whole team was bowled out by hostile bowling of the home side on mere 180 runs in 47.4 overs. 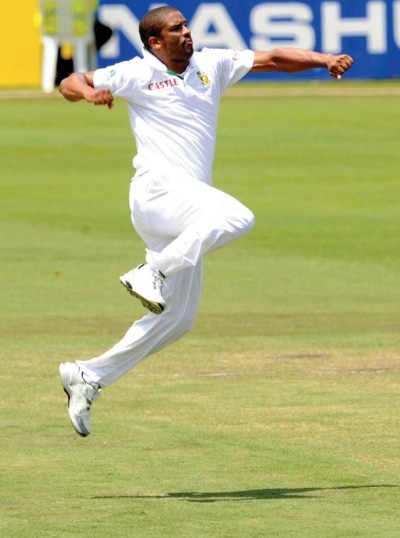 The young fast bowler of South Africa Vernon Philander, broke the back of the Lankan batting by grabbing five wickets, Dale Steyn picked four and Imran Tahir claimed one wicket.

The hosts managed 90 runs after losing Smith just seven deliveries ahead of the stumps on the first day at his personal contribution of 61 runs. Jacques Rudolph and the night watch man Dale Steyn were unbeaten on 27 and 0 respectively while 34 overs were bowled in the innings.

The Proteas lost Steyn early on the second day when he was run out in a needless mix up without any addition in the overnight score. The run machine, Hashim Amla was the next batsman who came in and joined with Rudolph. It was not a good day for him as he lost his wicket after scoring 18 runs with the addition of 35 runs in the total. Thisara Perera got the wicket of Amla and continued the aggression by sending back Rudolph caught by Tharanga Paranavitana at first slip on 44 runs.

The hosts lost their fourth wicket at 136 runs when Jacques Kallis and AB de Villiers got together at the crease and consolidated the innings. Kallis opened up in style while punishing Perera for three fours in the 52nd over and was later hit badly by Dilhara Fernando on the second ball of the 55th over.

He got a life in the very next over of Fernando when the wicket keeper Kaushal Silva dropped him. The all rounder could not resist more and was gone after scoring 31 runs after sharing 37 runs partnership for the fifth wicket.

AB de Villiers made the difference and associated 97 runs with Ashwell Prince who was caught by the keeper Silva off Angelo Matthews on 39 runs. Mark Boucher replaced him as de Villiers kept on cruising at the other end with his aggression. He was unlucky to miss a ton by single run, caught by the substitute fielder Karunaratne at point on the bowling of Perera.

The seventh wicket was lost at 303 runs as Boucher secured one end while the tail enders kept on sliding.
The ninth wicket went down at 350 runs as Imran Tahir gave a solid stand to the wicket keeper batsman and accumulated unbeaten 39 runs for the last wicket at stumps on the third day. Boucher was one run short of fifty while Imran had already scored his best score in Test cricket and was unbeaten on 24 runs.

Sri Lanka has to blame themselves for the lead due to their poor ground fielding which let down at least four catches.
South Africa already has a vital first innings lead of 209 runs and they can anticipate winning the first Test in a commanding way.