England XI triumphed in the second match against Sri Lanka Cricket Development XI while their batsmen boosted the confidence ahead of the first Test.

Chamara Silva reminded the Sri Lankan selectors of his calibre by smashing 163 runs off 180 balls in the first innings. The English Captain, Andrew Strauss and their top order batsman Jonathan Trott thrashed tons in the first innings followed by four fifties from their batsmen in the second innings.

Earlier, Sri Lanka Cricket Development XI Captain, Thilina Kandamby won the toss and elected to bat on a placid wicket. They lost their two openers for 38 runs when Silva and Kandamby consolidated the innings with a solid partnership of 151 runs for the third wicket. The latter was gone for 64 off 139 balls with one six and 8 fours as the third wicket was lost at 189 runs.

Angelo Perera came in next, provided solid stand with the smooth going Silva and both of them scored the runs at their will. Silva plundered his century on the first ball of the 50th over while dispatching a six and continued with the aggression. He achieved 150 in the 66th over but lost his wicket in the next over after scoring brilliant 163 off 180 deliveries with the help of one six and 25 fours.

Angelo Perera kept on cruising but went back to the pavilion for 85 as Lokuarachchi provided some useful runs by scoring unbeaten 51 when the innings was declared for 431 after losing six wickets.

England XI started off in a commanding way by their openers, Andrew Strauss and Jonathan Trott who were severe on the bowling. The latter dispatched four boundaries to Isuru Udana in the 16th over, scored his fifty in the 22nd over and Strauss reached there in the 30th as both kept on adding the useful runs.

The flow of runs was continued, Strauss was the first to bang his hundred in the 44th over and opted for retiring himself out immediately. Trott went past his hundred in the 48th over and also followed the footsteps of Strauss and retired out for 101 runs. The innings was declared at 272 for the loss of four wickets at the end of the 66th over.

Tharanga Lakshitha and Sajeewa Weerrakoon were the only successful bowlers who made some impression by claiming one wicket each.

Sri Lanka Cricket Development XI lost three quick wickets for 53 and the fourth one was lost after the accumulation of 24 runs. Angelo Perera and Kaushal Lokuarachchi settled in well and negotiated the dangerous looking English bowling at merit. They overpowered the rival bowling by adding aggression and added 13 runs in the 24th and the next over consecutively while carrying on with the solid batting display.

Perera was 10 runs short of his hundred, Kaushal Lokuarachchi was batting on 40 when their second innings was declared for 199 runs after losing four wickets and a target of 359 was set for England to win the match.

England XI lost their first wicket on 32 in their second innings when Ian Bell was gone for 11. Kevin Pietersen and Ravi Bopara accelerated the innings as the first was more attacking of the two. Pietersen scored his fifty in the 20th over but was bowled by Kaushal Lokuarachchi on the last ball of the 21st over for 52 off 52 balls with 7 fours.

Matt Prior was promoted in the batting order and he utilised the opportunity by playing brisk cricket. Bopara posted his half century in the 24th over but lost his wicket for 66 after sharing a partnership of 83 runs for the third wicket. Patel was the next batsman who came in the centre and continued with the rhythm and chase for the target was on.

The duo contributed 64 runs for the fourth wicket when Prior was bowled by Vishwa Fernando for 84 off just 60 deliveries with one six and 13 fours. Patel continued the onslaught and became the strong contender for the Test cap by dispatching 72 runs from 78 balls assisted with two sixes and 4 fours.

Stuart Broad and Greme Swann kept the score board moving and the target was achieved on the fourth ball of the 61st over. Swann played a hurried knock of unbeaten 31 off mere 12 balls with one six and five fours as Broad remained unbeaten for 17.

Tharanga Lakshitha and Fernando were the top wicket takers with two each as Weerakoon and Lokuarachchi held one wicket each.

The England XI won the second warm up match by four wickets which must have lifted their confidence ahead of the first Test against Sri Lanka which will start from March 26, 2012 at Galle International Stadium. 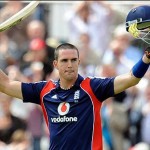