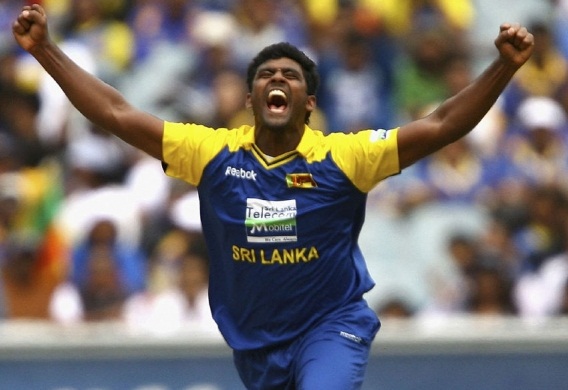 The Sri Lankan pace attack ripped through the strong batting line up of Pakistan as the home side won the first T20 and initiated the series on a positive note.

Sri Lanka scored 132 runs with three wickets in hand at the end of the metered 20 overs and Pakistan was bowled out for just 95 runs with 14 balls to spare.

Thisara Perera (Sri Lanka) was declared ‘Player of the match’ for his all round performance in the game.

Earlier, Mahela Jayawardene, the skipper of Sri Lanka, won the toss and came in to bat with Tillakaratne Dilshan. They had a miserable start as both of them went back to the pavilion for 11 runs in 2.3 overs as Sohail Tanvir struck early for the visitors. Kumar Sangakkara and Dinesh Chandimal joined together at the crease and the first opened up with three consecutive sixes in the fourth over off Mohammad Sami.

Sohail Tanvir clean bowled Sangakkara for 19 on the fourth ball of the fifth over as the Green Shirts missed a couple of run out chances. The Islanders found it hard to score the runs and lost their fifth wicket at 65 in 12.5 overs. Lahiru Thirimanne secured one end with authority and added 24 runs for the sixth wicket with Kaushal Thirimanne. The latter was gone as the score reached 89 and Thirimanne followed him at the same total at his individual contribution of 30 off 25 with 5 fours.

The Lankan Lions were in trouble as Thisara Perera took over and demonstrated a superb unbeaten knock of 32 off 16 mere deliveries with a couple of sixes and even fours. The home team managed a reasonable total of 132 for the loss of seven wickets when the last ball of the 20th over was bowled.

Pakistan had a disastrous start of their innings and lost their three top order batsmen for only 12 runs in four overs. The opener, Ahmed Shehzad kept wondering at one end as the wickets fell like nine pins from the other side. Shoaib Malik joined in next and got a life when dropped by Angelo Mathews at wide slip for two runs. The third wicket partnership contributed 34 runs as Shoaib Malik was caught superbly by Thisara Perera who came running in from third man and held an incredible catch.

The fourth wicket was lost at 46 in 9.2 overs and Umar Akmal became the next victim for 12 after the accumulation of 24 runs in the score. Ahmed Shehzad held the one end as the wickets kept on sliding from the other and none of the incoming batsmen gave a real fight. The Pakistani batsmen were unable to cope with the lethal pace bowling attack of the Lankan Lions and they surrendered without any endeavour.

Ahmed Shehzad was the eighth batsman who was dismissed at 36 off 42 balls with one six and three fours. Nine of their batsmen were unable to reach the double figures and their innings was folded back at 95 in 17.4 overs.

Nuwan Kulasekara, Lasith Malinga, Angelo Mathews and Sachithra Senanayke were the main destructors with two wickets each as Thisara Perera held one wicket.

Sri Lanka humiliated Pakistan by a big margin of 37 runs and the newly appointed captain of the Green Shirts for Twenty 20, Mohammad Hafeez, suffered a defeat in his first encounter.