Sri Lanka forced their way to a comprehensive victory with a superb team work over the competent Pakistan in the opening Test at Galle. 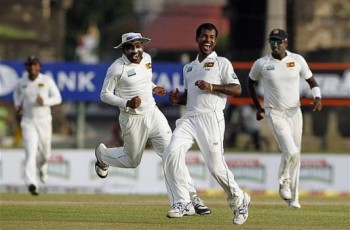 Kumar Sangakkara (Sri Lanka) was declared ‘Player of the match’ for his authoritative unbeaten knock of 199 in the first innings.

The first Test of the three match series which was the fourth day of the encounter came to an end on Monday, June 25, 2012, at Galle International Stadium.

Earlier, Pakistan started the fourth day in a dismal situation at 36 in 15 overs for the loss of their three top order batsmen. Younis Khan had yet to open his account and the night watchman, Saeed Ajmal was at the crease for 11 runs. The visitors faced an early set back when Saeed Ajmal ran himself out for 12 runs on the second ball of the 17th over.  The youngster Asad Shafiq, replaced him in the centre and initiated his innings with a four in the 19th over.

The batsmen avoided any undue risks but utilized all possible scoring chances and gathered 13 runs in the 68th over with the assistance of 3 fours. They shared a 151 runs solid partnership for the fifth wicket and enhanced the score to 189 when Asad Shafiq was caught smartly in the slip off Rangana Herath for 80 runs. Younis Khan became the next victim at 212 runs after contributing a hard fought 87 runs and Pakistan was reeling at 7-243 in 94.4 overs.

The wicketkeeper batsman, Adnan Akmal secured one end as the tail of Pakistan vanished without much defiance. He remained unbeaten for 40 as the whole team was bowled out for 300 runs in 114 overs.

Nuwan Kulasekara and Suraj Randiv were the main wicket takers with three wickets each, Rangana Herath held two and Nuwan Pradeep chipped in with one wicket.

Sri Lanka won the match with a huge margin of 209 runs and it looks like they are back on the winning track in Test cricket after the retirement of their great off spinner, Muttiah Muralitharan. The second Test of the series will commence from June 30, 2012, at Sinhalese Sports Club Ground, Colombo.