The formidable Australians continued their dominance in the Ashes by beating England all ends up in the third Test at Perth and leads the series at 3-0.

Australia piled up 385 runs in the first innings and declared their second at 6-369. England scored 251 in their first and was bowled out for 353 runs in the second.

Steven Smith (Australia) was declared ‘Player of the match’ for his fantastic match saving innings of 111 in the first innings.

Earlier, the Englishmen started the day at 5-251 in 67 overs whereas Ben Stokes and Matt Prior were resisting at 72 and 7. The first was scoring most of the runs while the latter kept on creeping at the other end. The sixth wicket partnership was broken at 296 when Prior was gone for 26 and was replaced by Tim Bresnan. Ben Stokes thrashed his maiden Test ton with a four and continued his aggressive knock.

The hosts got the prize wicket of Stokes at 336 while he was caught behind smartly by Brad Haddin off Nathan Lyon for 120 off 195 balls with 1 six and 18 fours. The tail was folded back quickly by the Aussies bowlers and the innings of England came to an end at 353 in 103.2 overs.

Australia clinched the important game by a big margin of 150 runs and heads the series at 3-0. 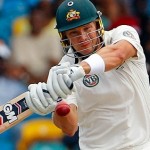 Australia five wickets away from grabbing the Ashes – 3rd Test