The English batsmen were unable to cope up with the steamy fast bowling of Australia whereas Peter Siddle and Ryan Harris assisted their team with a smooth win.

The Kangaroos declared their first innings after amassing 570 runs for the loss of 9 wickets followed by another declaration in the second at 3-132. The first innings of the Englishmen was squeezed for 172 and they managed 312 in the second.

Mitchell Johnson (Australia) was announced ‘Player of the match’ for his lethal bowling spell of 7-40 in the first innings.

Earlier, the visitors commenced their second innings at 6-247 in 90 overs whereas Matt Prior and Stuart Broad were unbeaten on 31 and 22 runs respectively. The latter started off nicely by hitting a six on the fourth ball but was gone on the very next delivery for 29. Prior set the tone on aggression and reached his 27th Test fifty with a four during the fifth over of the day. He kept on enhancing the score and became the 9th victim at 301 after contributing 69 runs. The last pair added another 11 runs to the total before the entire English side was bowled out for 312 in 101.4 overs.

Peter Siddle was the supreme bowler with four wickets, Ryan Harris got three whereas Mitchell Johnson, Nathan Lyon and Steven Smith shared one wicket each.

Australia humiliated England by a hefty margin of 218 runs and leads the five match series at 2-0. 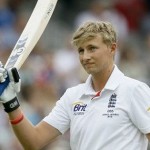