A maiden Test ton by the middle order batsman of Australia, Steven Smith, consolidated the position of the visitors vs. England in the ongoing 5th Test at Oval.

The Kangaroos piled up 492 runs after losing 9 wickets in their first innings while utilising 128.5 overs and England scored 32 without losing any wicket in 17.3 overs.

The second day’s play was delayed due to rain, it started at about 0215 pm and came to an end on Thursday, August 22, 2013, at Kennington Oval, London.

Earlier, the visitors commenced the day at 4-307 in 90 overs whereas Steven Smith and Peter Siddle were at the crease with 66 and 18 runs. The pair added 13 runs to the overnight score when Peter Siddle was clean bowled by James Anderson for 23 and was replaced by Brad Haddin. Smith kept on cruising at his end and the Aussies scored 22 runs in the first ten overs. The run rate was boosted up by the batsmen after the 100th over and the boundaries were witnessed at regular intervals.

Steven Smith powered his maiden Test hundred with a grand six on the first ball of the 113th over and the stumps of Brad Haddin were dislodged by Jonathan Trott for 30 off 57 with 5 fours. The sixth wicket fell at 385 as James Faulkner arrived in the center whereas Smith carried on with his solid batting. The fourth hundred of the innings illuminated the board in the 118th over as Faulkner accumulated 15 runs in the next one with 3 fours. He became the next victim at 422 at his personal contribution of 23 as Mitchell Starc joined in with Smith. They added 13 runs in the 122nd over with a couple of fours as the first was gone for 13.

Ryan Harris played a brisk innings of 33 off just 27 balls with 2 spicy sixes and 1 four and was caught and bowled by Anderson. Steven Smith remained unbeaten for 138 off 241 with 2 lofty sixes and 16 fours as the Australian skipper, Michael Clarke, declared the first innings at 9-492 in 128.5 overs.

James Anderson was the star performer with four wickets, Graeme Swann got two whereas Stuart Broad, Chris Woakes and Jonathan Trott shared one wicket each.

The England captain, Alastair Cook, opened the first innings along with Joe Root with caution and both batsmen did not take any risk. They scored just 18 runs in 10 overs with one four from each of them and Cook got his second boundary in the next one. The hosts reached 32 in 17.3 overs when play was called off due bad light whereas Cook and Root were unbeaten for 17 and 13 runs respectively.

Australia has amassed a huge first innings score and will try to get some early wickets tomorrow morning whereas England batsmen have to bat sensibly to remain in the game. 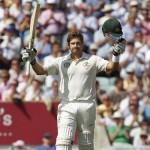