Pakistan scored 135 runs while batting first and set a target of 136 runs for Bangladesh to win the match but they could score 85 runs and lost the match by a margin of 50 runs. 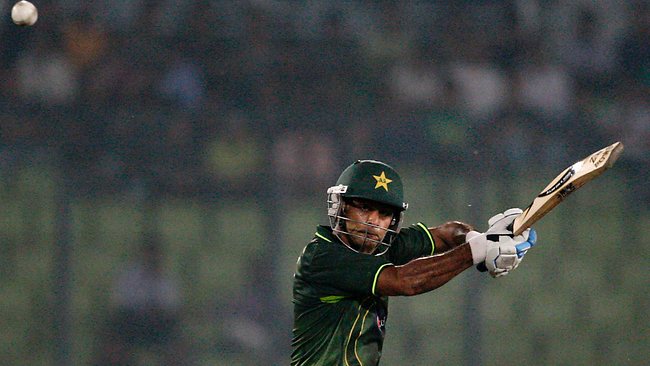 All rounder Mohammad Hafeez of Pakistan was declared ‘Player of the match’ by a unanimous decision.

Pakistan started their tour of Bangladesh with the only T20 match which will be followed by three One Day Internationals and two Tests.

Misbah-Ul-Haq, the Captain of Pakistan won the toss and opted to bat on a pitch which was supposed to take turn later in the day.

They had a reasonable start with Mohammad Hafeez and Imran Farhat and scored 22 runs at the end of the third over.
Imran continued with the aggression by dispatching Shakib Al Hasan for two consecutive fours in the fourth over.
Shakib got the revenge on the fourth ball of the same over when Imran was caught at the wicket by Mushfiqur Rahim on 16 runs.

The first wicket was lost at 30 runs in 3.4 overs and young Asad Shafiq joined in with Hafeez.

The momentum was carried on by them as they kept on scoring brisk runs and especially Hafeez was dashing of the two and smashed Abdur Razzak for a six on the fifth ball of the sixth over.

He was gone after scoring 25 runs off 31 balls with the assistance of one six and two fours.

Talented Umar Akmal was the next batsman who came in the center and made his intentions clear by hitting two fours in the 11th over.

He could not continue and went back to the pavilion after scoring quick 20 runs off 14 deliveries comprising three fours.
The third wicket was gone at 87 runs off 12.2 overs and Pakistan looked like scoring 150 runs in their innings.

The Bengal Tigers took over from there and took charge of the situation by claiming wickets at regular intervals.
Misbah secured one end while he could not get assistance from the other end and Pakistan managed 135 runs for the loss of seven wickets at the end of the 20th over, Misbah remained unbeaten on 21 runs.

Shakib and Alok Kapali were the main wicket takers by claiming two wickets each as Razzak and Nasir Hossain shared one wicket each.

Misbah surprised Bangladesh by handing over the ball to off spinner Hafeez who started his magical spell by giving just one run in the first over.

Bangladesh lost their first wicket at three runs in 1.4 overs when Naeem Islam was trapped leg before wicket off Umar Gul.
The top order batsmen were unable to cope with the lethal bowling attack of Pakistan and opted defensive tactics.
The visitors invaded them and grabbed six wickets for mere 39 runs in 11.3 overs.

Nasir Hussain tried to accelerate the innings but that was too late and the wickets kept on tumbling at the other end.
He remained unbeaten while becoming the top scorer with 35 off 38 balls assisted with one six and two fours as Bangladesh could score 85 runs after losing nine wickets at the end of the allotted 20 overs.

Mohammad Hafeez and Shoaib Malik were the top wicket takers with two wickets each as Umar Gul, Shahid Afridi and Aizaz Cheema chipped in with a wicket each.

Pakistan showed their dominance in the match and sent a warning to Bangladesh for rest of the series by winning the match comprehensively by 50 runs.