Kumar Sangakkara laid a solid foundation while batting and Angelo Mathews led Sri Lanka from the front as they grabbed the match convincingly vs. West Indies.

The Lankan Lions smashed 219 runs for the loss of 8 wickets in the assigned 41 overs and the Caribbeans scored 190 with one wicket remaining in the allocated overs.

Kumar Sangakkara (Sri Lanka) was announced ‘Player of the match’ for his match winning knock of unbeaten 90 runs.

The 5th match of the West Indies Tri-Nation Series came to end on July 8, 2013, (which was the second day of the game) at Queen’s Park Oval, Port of Spain, Trinidad .

Earlier, Kieron Pollard, the captain of West Indies won the toss on day one and asked the visitors to bat first.  The decision paid off instantly since the Islanders lost their three dependable batsmen for 29 mere runs in 6.2 overs. Upul Tharanga, Mahela Jayawardene and Dinesh Chandimal became the victims of the rival pace attack and lost their wicket for 7, 7 and 2 runs respectively. Kumar Sangakkara and Lahiru Thirimanne put their heads down and started creeping but were unable to score any boundary until the end of the19th over.  The play was called off after that because of rain as the score touched 60.

The second day’s play was affected by weather again and was reduced to 45 overs when Sangakkara and Thirimanne initiated at 11 and 13 runs. The first hit a couple of fours and the score was taken to 93 in 25.5 overs as Lahiru Thirimanne was clean bowled by Marlon Samuels for 23. He was replaced by the Sri Lankan skipper, Angelo Mathews, who hit the first six of the innings in the 28th over. The match was once again disrupted by rain, was limited to 41 overs a side and Mathews was gone after scoring 30 runs off 29 balls with 2 sixes and even fours.

Kumar Sangakkara dispatched his 76th ODI fifty as the wickets kept on falling at the other end at the regular intervals. He secured his end for 90 off 95 deliveries with 1 six and 6 fours while the tourists powered 8-219 after 41 overs.

Kemar Roach was the highest wicket taker with four, Jason Holder got two whereas Marlon Samuels and Kieron Pollard shared one wicket each.

Chris Gayle along with Johnson Charles opened the innings for West Indies and the first was dropped at 6 by Nuwan Kulasekara off his own bowling in the third over. Gayle hit 2 fours in the next over and was caught by Shaminda Eranga off Mathews for 14. The first wicket fell at 25 and Charles followed his partner four runs later at 14 as well as the middle order batting of the hosts crumbled and they went down 4-31 in 8.2 overs. Lendl Simmons joined in with Darren Bravo and they defended the Lankan bowling attack at merit.

The duo registered 3 sixes and 2 fours at the completion of the 27th over when the hundred of the innings was displayed on board. Simmons accumulated 11 runs in the 29th over and achieved his 10th ODI half century with a grand six in the following over. Darren Bravo reached his 10th ODI fifty and the score was enhanced to 154 in 31.6 overs when Lendl Simmons became the fifth victim for 67 off 78 with 4 mighty sixes and 5 fours. There was a panic in the lower order batting of the home side and Bravo was the only batsman who kept himself busy at his end. Darren Bravo was finally caught by Jeevan Mendis off Angelo Mathews for 70 from 84 comprising 1 six and 4 fours. The Windies managed 190 after losing 9 wickets at the end of the 41st over.

Sri Lanka won their second game of the event with a margin of 39 runs and boosted their table with four points.

The current standing of three teams in the ongoing competition is as follows:

The next match will be played between India and Sri Lanka on July 9, 2013, at the same venue. 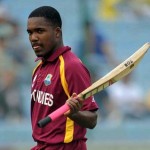 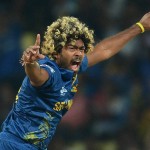