The lack of luck continued following Yorkshire in the Champions League Twenty20 when Chennai Super Kings blew them away in their last match of Group B.

Yorkshire scored 140 runs for the loss of six wickets in the allotted 20 overs. Chennai Super Kings touched the required target by smashing 141 with four wickets in hand and six balls to spare.

Subramaniam Badrinath (Chennai Super Kings) was declared ‘Player of the match’ for his match winning innings.

The Champions League Twenty20 – Group B match was played on Monday, October 22, 2012, at Kingsmead, Durban.

Suresh Raina, the acting captain of Chennai Super Kings, won the toss and went into field first. The skipper of Yorkshire, Andrew Gale and Adam Lyth opened the innings carefully and got just four runs in the first two overs. The third over produced 15 runs with one four from Gale and two from Lyth as the first hit two sixes in the next two overs. They gathered 35 runs in five overs when Andrew Gale was gone for 23 off 22 balls with 2 sixes and 1 four.

Adam Lyth followed him one run later for 11 and Yorkshire was 3-43 in eight overs when David Miller and Gary Ballance got together in the centre. They started creeping and enhanced the run rate by scoring 12 runs in the 11th over with two fours and another 2 sixes in the 13th over. Ballance lifted the run rate by adding 17 runs in the 17th over with two sixes and took the score to 121 in 17.2 overs when Miller was caught by Ravichandran Ashwin off Doug Bollinger for 28.

Gary Ballance continued with his onslaught and completed his fourth T20 fifty in the 19th over with two more sixes. He was unluckily run out for 58 off just 38 deliveries with 5 huge sixes and 1 four as Yorkshire reached 140 with four wickets in hand in 20 overs.

Doug Bollinger and Albie Morkel were the highest wicket takers as Ben Hilfenhaus claimed one wicket.

Chennai Super Kings had a horrible start by losing their openers Faf du Plessis and Murali Vijay for just 26 runs in 4.2 overs. Suresh Raina and Subramaniam Badrinath stopped the invasion of the rival bowlers while keeping the score board busy. They found it hard to dispatch the boundaries often but the addition to the score never dried up. The duo associated for 48 runs as Suresh Raina was caught by David Miller at deep cover off Oliver Hannon-Dalby for 31 off 30 with 1 six and 1 four.

MS Dhoni came in next as Badrinath accumulated 11 runs in the 14th over with 2 fours and Dhoni added another 11 runs with one six in the next over. Subramaniam Badrinath was clean bowled by Iain Wardlaw for 47 off 38 with 4 fours as the total reached 117 in 16.2 overs. MS Dhoni carried on with his stylish batting before his stumps were uprooted by Wardlaw again for 31 off 23 with 2 sixes and even fours. The target was achieved with a single by Wriddhiman Saha on the last ball of the 19th over.

Chennai Super Kings won the match by four wickets, in their second victory of the tournament, but they were unable to qualify for the semi-finals with 8 points. 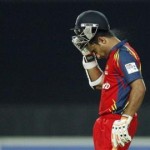 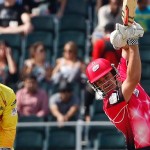 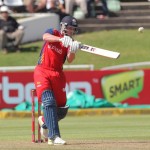