Perth Scorchers were kicked out of the Champions League Twenty20 2012, by Delhi Daredevils well led by Virender Sehwag and all rounder, Ajit Agarkar.

Perth Scorchers managed 121 runs after losing half of their side in the stipulated 20 overs as Delhi Daredevils smashed 123 runs with three wickets in hand and three balls to spare.

Ajit Agarkar (Delhi Daredevils) was declared ‘Player of the match’ for his all round performance in the game.

The Champions League Twenty20 – Group A match was held on Sunday, October 21, 2012, at Newlands, Cape Town.

Mahela Jayawardene won the toss for Delhi Daredevils and offered the batting to Perth Scorchers. They lost an early wicket at 11 in 1.5 overs as Simon Katich got together with the opener Shaun Marsh. They kept the score board busy with a boundary almost in each over and touched the 50 runs mark in the 9th over. Shaun Marsh added 10 runs in the 12th over with a couple of fours and the score was taken to 84 in 13 overs.  He was caught at midwicket by Virender Sehwag off Ajit Agarkar for 39 off 41 balls with 6 fours.

Mitchell Marsh dropped in next with the bat as Simon Katich lost his wicket after three runs at his personal feat of 34 off 33 with 1 six and 2 fours. Mitchell Marsh was the only other notable batsman who went into double figures by scoring 20 runs off 18 with 2 fours as Perth Scorchers reached 121 with five wickets in hand after consuming 20 overs.

Delhi Daredevils opened their innings with Mahela Jayawardene and Virender Sehwag in a dismal way as the first was gone after scoring just four runs. The Perth Scorchers bowlers maintained their lethal line and length and the rival batsmen found it hard to score the runs. Sehwag was the only batsman who provided the desired resistance where the wickets kept on diminishing from the other end at a regular intervals.

Delhi Daredevils were in deep trouble at 4-60 in 9.5 overs after losing their prominent batsmen including Unmukt Chand, Kevin Pietersen and Ross Taylor. Irfan Pathan associated with Sehwag and the runs started creeping but the pair found it hard to get the boundaries. Sehwag was dropped by Nathan Remmington at third man off Nathan Coulter-Nile for 45 runs on the last ball of the 15th over. The expensive let off came at an important juncture, resulted in a six and the batsman attained his 19th T20 fifty as well.

The fifth wicket contributed valuable 34 runs and lifted the score to 94 as Irfan Pathan was caught by Katich off Rimmington for 14 on the first ball of the following over. Virender Sehwag departed three balls later for 52 off 44 deliveries with 1 six and 4 fours. Delhi Daredevils were 7-105 after 18 overs and still required 17 runs to win the match on the last 12 balls. Ajit Agarkar and Pawan Negi saw them through to the required target as the latter hit the winning four on the third ball of the last over.

Ajit Agarkar remained unbeaten for 11 off 7 balls with 2 fours, Negi contributed 7 off 7 as the total touched 123.

Delhi Daredevils outplayed Perth Scorchers in a cliff-hanger by a margin of three wickets and have a bright chance for the semi-final race. They have accumulated 10 points in the three games played by them and are leading Group A at the moment. 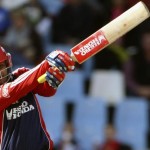 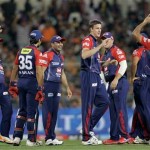 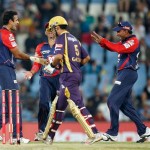