Lions won the exciting game against Chennai Super Kings with a superb team effort led by Aaron Phangiso while bowling and Gulam Bodi through a spirited batting.

Chennai Super Kings scored 158 runs with four wickets in hand at the closure of the scheduled 20th over and the Lions piled up 159 runs for the loss of just four wickets in 19.3 overs.

Aaron Phangiso (Lions) was declared ‘Player of the match’ for his exclusive bowling spell of 4-1-17-2 wickets at a batting paradise strip.

The pool match in Group B of the Champions League Twenty20 was played on Tuesday, October 16, 2012, at Newlands, Cape Town.

The toss was won by Alviro Petersen, the captain of Lions, who decided to field first. Faf du Plessis and Murali Vijay started off well and both got a boundary each in the first couple of overs. The next over produced 15 overs with 2 fours from du Plessis and 1 from Vijay. They accumulated 43 runs after the first five overs as Faf du Plessis lost his wicket in the next over for 25 off 20 balls with 1 six and 2 fours.

Suresh Raina joined in with Vijay, punched one six in the 9th over and hit two consecutive fours during the next over. Raina was caught by Petersen at deep mid-off on the bowling of Zander de Bruyn for 20 off 16 with 1 six and 2 fours. Vijay followed him two balls later for 22 and the third wicket was gone at 70 in 10.2 overs.

The skipper of Chennai Super Kings, MS Dhoni and Ravindra Jadeja got together at a rather critical situation and opted to attack. Jadeja hit 1 six and 2 fours in the next two overs and Dhoni opened up with a six in the 14th over. The score was enhanced to 102 in 14.3 overs as Jadeja lost his wicket for 21 and the fifth wicket went down four runs later. Subramaniam Badrinath replaced him in the centre with Dhoni who scored 12 runs in the 17th over with 1 six and 1 four.

The pair picked up the run rate at the right time and associated a 50 runs partnership in just 26 deliveries studded with quite a few boundaries. MS Dhoni was caught by Jean Symes at long off on the bowling of Sohail Tanvir for 34 scored from 26 balls with 2 huge sixes and even fours. Badrinath remained unbeaten for 27 off just 14 deliveries with a couple of big sixes as Chennai Super Kings managed 158 runs for the loss of six wickets in 20 overs.

The Lions had a horrifying start by losing Alviro Petersen on the very first ball when he was declared leg before wicket at the bowling of Doug Bollinger. The incoming batsman Quinton de Kock became the next victim off Bollinger after scoring just five runs and the Lions were 2-8 in 2.5 overs. Neil McKenzie joined with the other opener Gulam Bodi and they tried to mend the early loss by sheer application.

The Lions scored just 33 runs in the first eight overs as Bodi hit 2 sixes in the following over of Albie Morkel and posted the first fifty of the innings. He carried on with another 3 fours in the next two overs and dispatched his 9th T20 fifty with a six in the 12th over. The third wicket contributed 93 valuable runs on just 64 balls when Gulam Bodi was caught behind by Dhoni off Morkel. He thrashed 64 runs off 46 deliveries with 4 super sixes and 5 fours and Neil McKenzie became the next victim after 14 runs at his personal feat of 33 from 34 balls with 4 fours.

Jean Symes and Chris Morris did not surrender, they kept the chase on and the Lions required 30 runs from the last 18 balls with six wickets in hand. The target was reduced to 20 from the last 12 deliveries as Symes was the most aggressive of the two. He hit 9 runs in the 19th over and the duo got 11 runs in that over as 9 more runs were needed from the last over. Morris stole a single on the first ball and Symes hit two back to back fours in the next two deliveries and won the match for his team.

The unbroken fifth wicket partnership smashed 44 runs in just 19 deliveries as the Lions hammered 159 with six wickets in hand and three balls to spare. Jean Symes stood firm with 39 off 23 balls with 5 fours and Chris Morris gave him nice support while securing his end with 12 runs.

Doug Bollinger was the main striker with two wickets as Albie Morkel and Ravichandran Ashwin claimed one wicket each.

The Lions won the thrilling encounter by a huge margin of six wickets and grabbed eight points while capturing both games they have played whereas Chennai Super Kings have lost both matches they participated in. 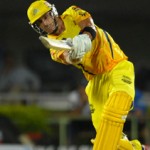 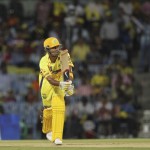 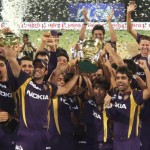