David Warner has placed Australia in a commanding position by scoring 47 runs in the second innings of the final Test against New Zealand. The home side requires another 169 runs with all their wickets in hand and the visitors are in sight of the second consecutive defeat in the series.

The Black Caps could manage 150 runs in their first innings but their bowling put them back in the match by folding the first innings of the Kangaroos on 136 runs and earned a lead of 14 runs.

The second and final Test is being staged from December 9, 2011, at Bellerive Oval, Hobart.

Earlier the Kiwi’s had lost three wickets at 73 runs when Captain Ross Taylor and Kane Williamson consolidated the innings and remained unbeaten on 42 and 34 runs respectively. They added 66 valuable runs for the third wicket and took the score to 139 in 44 overs at the close of the second day’s play.

New Zealand suffered an early blow when Williamson was caught brilliantly in the second slip off Peter Siddle without any addition in the overnight score. That was a wicket maiden over while the newcomer Dean Brownlie and Taylor were unable to move the score board in the following two overs.

Taylor initiated scoring in the 48th over of the innings and accumulated seven runs including a rolling boundary.
Brownlie opened his account with style and dispatched two fours in the 51st over off Siddle. Taylor was dropped on 48 runs by James Pattinson of his own bowling on the third ball of the 52nd over and completed his fifty on the very next ball.

The Australian bowlers did not give up and continued bowling on line and length and batsmen found it hard to score the runs. Taylor lost his wicket at 56 runs once he got a thick edge and Michael Clarke caught him in the first slip off Pattinson. The fifth wicket was lost at 171 runs and the visitors found it hard to produce another solid partnership as the wickets kept on skidding.

The entire team was sent back to the pavilion on 226 runs in 78.3 overs and their lead spread to 240 runs.
Pattinson, Siddle and Nathyan Lyon were the supreme bowlers for the home side with three wickets each as Michael Hussey claimed one wicket.

Australia required 241 runs for the victory and their openers Phillip Hughes and Warner initiated in a positive manner by availing all scoring chances while securing their wickets. Warner was dynamic of the two and sent the ball out of the boundary in his typical aggressive style.

The fifty of the innings was achieved by another boundary dispatched by Warner and the Black Caps were unable to stop the flow of runs. Australia was marching towards the victory and eliminated 72 runs from the target at stumps on the third day. Warner has achieved his highest score in the second Test by reaching 47 runs off 50 balls with 8 fours in his second Test and Hughes was unbeaten on 20 runs.

Australia is in sight of their second continuous victory against New Zealand and only miracle can save them. 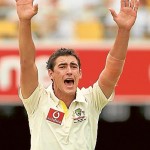 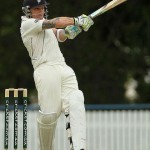 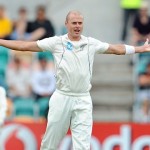