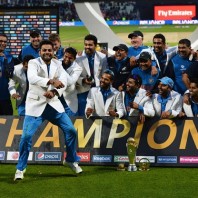 Ravindra Jadeja supported by Virat Kohli and their bowlers led the determined Indian side to a glorious win vs. England in the final of the ICC Champions Trophy.

Ravindra Jadeja (India) was declared ‘Player of the match’ for his superb all round performance in the game.

Shikhar Dhawan (India) was announced ‘Player of the series’ for his outstanding batting in the tournament. He was the highest run scorer in the event and hammered 363 runs at an awesome average of 90.75, the best of 114 with two hundreds and one fifty.

The final of the 2013, ICC Champions Trophy was played on Sunday, June 23, at Edgbaston, Birmingham.

Earlier, Alastair Cook, the skipper of England, won the toss and invited his rival team to bat first. Rohit Sharma opened the innings along with Shikhar Dhawan and they scored 19 runs in 3.5 overs when the first was clean bowled by Stuart Broad and was replaced by Virat Kohli. Dhawan hit the first six in the sixth over followed by a couple of fours in the eighth one. He was caught by James Tredwell off Ravi Bopara for 31 from 24 balls as the home bowlers came back in the game by penetrating through the middle order batting of the Blue Shirts. 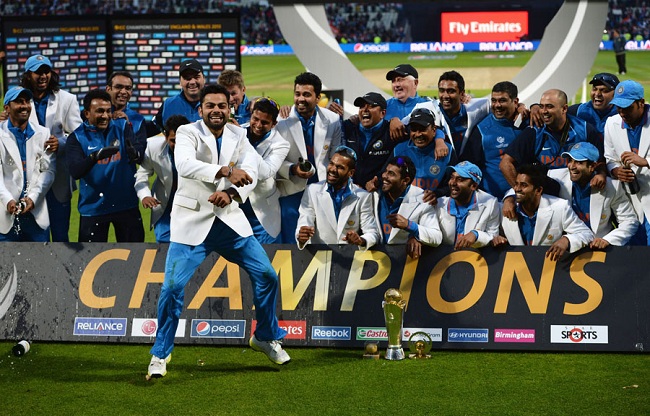 Team India – The winners of the 2013 ICC Champions Trophy

India was reeling at 5-66 in 13 overs as Ravindra Jadeja walked in the park whereas Kohli kept on consolidating at the other end. The boundaries started pouring in regularly while  Kohli was dropped at 36 by Jonathan Trott at short third man off Broad in the 18th over. The batsmen dispatched 2 sixes in the coming overs as Virat Kohli was caught by Bopara at long-off at the bowling of James Anderson for 43 scored from 34 with 1 six and 4 fours. Ravindra Jadeja stood firm at his end for 33 off just 25 deliveries with 2 big sixes and even fours as the Men in Blue blasted 129 after 20 overs.

Ravi Bopara was the star performer with three wickets whereas James Anderson, Stuart Broad and James Tredwell shared one wicket each.

England lost Alastair Cook at just three runs as Jonathan Trott got together with Ian Bell. Trott hit 2 fours in the third over but was gone at 28 after contributing 20 as the spin attack of Jadeja and Ravichandran Ashwin removed Ian Bell and Joe Root for 13 and 7 runs respectively. The hosts were struggling at 4-46 in 8.4 overs as Eoin Morgan and Ravi Bopara joined in at the crucial stage of the game. The pressure was taken off by the duo at the crease as they kept on creeping with odd boundaries.

Bopara got the first six of the innings in the 15th over followed by another one two overs later as the score went past the hundred runs mark as well. The home side required 28 runs to win the game in the last 18 balls when Ishant Sharma brought India back in the game by removing the two batsmen in the 18th over. Eoin Morgan and Ravi Bopara were dismissed on the consecutive deliveries for 33 and 30 runs respectively. The stumps of Joss Buttler were dislodged by Ravindra Jadeja and the eighth batsman surrendered at 113 in 18.4 overs. The target was reduced to 15 off 6 deliveries and England managed 124 runs with two wickets remaining in 20 overs.

Ravindra Jadeja, Ravichandran Ashwin and Ishant Sharma were the main wicket takers with two wickets each whereas Umesh Yadav held one wicket.

India won the exciting final with a little margin of five runs and was crowned  ruler of the 2013 ICC Champions Trophy.