Will Dhoni lead India in the 2015 World Cup? 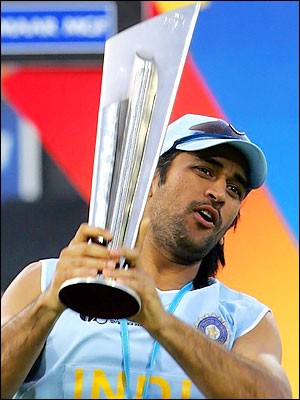 Thus, this is the question in the minds of all the Indian fans, after Dhoni stated that it will be in 2013 that he will take a call to play in the 2015 World Cup in Australia. There are four years to go, but defending the World Cup successfully would be a rare occurrence in Indian cricket and so the pride of a nation having more than one billion people is at stake.

Dhoni belongs to the rare breed of captains who have been successful, being wicket-keeper batsmen. That breed is ‘rare’ primarily due to the fact that this job involves three aspects, captaincy being the most crucial followed by wicket-keeping and batting. It is extremely tough to maintain mental, physical and intellectual fitness equally, when playing professional sport these days but Dhoni has been an exception so far. He keeps wickets in all three formats of the game not just for India, but for Chennai Super Kings as well in the IPL every year. I have been told that India has played on an average of 300 days out of 365 days in a calendar year, since the last three years including the IPL which means that Dhoni is on his hunches with almost every breath he takes! So Dhoni’s statement could also be directed towards the BCCI to preferably reduce the team’s workload, so that his workload reduces too and India’s performances become more consistent.

Barring wicket-keeping, Dhoni is also one of India’s key batsmen in the absence of senior players in the ODIS in particular. His batting position keeps varying depending on the situation, so he has to be mentally prepared to bat anytime when the team needs him to. His ODI average of around 50 and over 5000 runs shows his consistency with the bat, with most of those runs coming in the last four years since Dhoni has had to change his natural, attacking game to being less attacking and taking more ones and twos by running quickly between the wickets. And Dhoni is one of the fastest runners between the wickets in the modern game alongside the likes of his Chennai teammates, Suresh Raina and Michael Hussey. Can his legs contain the same freshness in the next four years?

And then ofcourse, comes captaincy. It takes a great intellect to be a great leader. Dhoni has a sharp intellect in terms of forming strategies and implementing, while also thinking on-the-spot at the same time. But as the freshness in his legs, the concentration power of his intellect also has a date when will begin to fade. His cool-headedness could clash with the pain that he might have to endure at some point of time physically, and that could drain him out mentally which could actually tire him from playing cricket. So it’s this cycle of events, which Dhoni is concerned about and certainly he has the most difficult job to perform out of all contemporary cricketers.

However, Dhoni is known to have the Midas touch in whatever he does. He could be called a ‘freak’ as he is a rare, intellectual cricketer, a statesman and a brand all rolled into one. He never loses his focus when it comes to his profession and that is the key to a long career. Besides, he remains one of the fittest cricketers in the Indian team and has only missed some matches because of the BCCI’s rotation policy. I would not be astonished if Dhoni can emulate Clive Lloyd and Ricky Ponting by winning the World Cup twice as skipper but for that it is imperative for him to reassess his role in Test cricket, his relationship with the BCCI and his future with the Chennai Super Kings in the IPL.

May the man from Jharkhand dominate Indian cricket for a long period of time and consequently, India should dominate the world.