Brad Hodge turned the tables for Rajasthan Royals by an aggressive knock of unbeaten 48 off 21 balls as Deccan Chargers lost the exciting match by 5 wickets.

Deccan Chargers piled up 196 runs with eight wickets still in hand at the end of the allocated 20 overs and Rajasthan Royals got past that total by smashing 197 for the loss of five wickets.

Brad Hodge (Rajasthan Royals) was declared ‘Player of the match’ for his all round performance in the match.

The 20th match of the Indian Premier League was played at Sawai Mansingh Stadium, Jaipur on April 17, 2012 and the crowd was thrilled to witness the nail biting encounter.

Earlier, Kumar Sangakkara, the captain of Deccan Chargers won the toss and opted to bat first on a flat wicket which looked full of runs. The skipper initiated the innings with Shikhar Dhawan and they started off in a grand style by posting 49 runs on board at the end of the fifth over. The boundaries were recorded often as both batsmen were placing them nicely in the gaps and accumulated 83 runs in the first 10 overs. They took the score to 94 in 10.4 overs when Sangakkara was caught by Dishant Yagnik off Brad Hodge for 44 off 32 balls with one six and 5 fours.

Daniel Christian came in next and joined with the fast going Dhawan who continued adding runs at the other end. Hodge took an excellent catch of Dhawan while making his ground by running in from deep square leg off Siddharth Trivedi for 52 from 43 deliveries with 8 fours. Jean-Paul Duminy came in the centre after the fall of the second wicket and the duo maintained the tempo of scoring until the end of the 17th over.

Dumimy was severe on the rival bowlers, scored 12 runs in the 18th over with two fours and added 13in the next over with two sixes. He butchered Amit Singh in the 20th over for 18 runs that included 2 towering sixes and one four while achieving his fifty as well. Deccan Chargers amassed 196 runs for the loss of just two wickets at the end of their required 20 overs, Duminy remained unbeaten for 58 off mere 26 balls with 5 huge sixes and 3 fours as Christian was at the crease for 29 off 19 with one six and two fours.

Rajasthan Royals opened the innings with their captain, Rahul Dravid and Ajinkya Rahane while they gathered five runs in the first over. The old war horse, Dravid earned 12 runs in the second over with three fours and later on the crowd witnessed the boundaries showering from both batsmen. The score was enhanced to 62 in 5.5 overs when Dravid was bowled by Daniel Christian for 42 off 24 balls with one six and 7 fours.

Ashok Menaria was the next batsman who took guards as Rahane continued with his assignment of scoring briskly and the first assisted him well at the other end. Menaria was gone on the last ball of the 12th over for 22 and Rahane became the next victim for 44 off 31 deliveries with the help of one six and 5 fours. Rajasthan Royals were reeling at 135-4 in 15.2 overs and the target looked out of their reach when Brad Hodge took over by dispatching 17 runs in the 17th over that included 4 fours. The target was reduced to 38 from 18 balls as Johan Botha and Hodge grasped 13 runs from the 18th over with a six from the first.

Botha was gone for 14 on the second ball of the 19th over when Hodge punished Anand Rajan for 13 with one six and a four as 11 runs were needed from the last six deliveries. Brad Hodge took three runs off the first two balls and Dishant Yagnik made the life easy for his team by getting two successive fours on the next two balls. Rajasthan Royals plundered 197 runs with five wickets still in hand whereas Hodge remained unbeaten for 48 off 21 balls with 2 sixes and 6 fours and Yagnik was at the other end with 9 off three balls with two fours.

Amit Mishra was the highest wicket taker with three as Daniel Christian and Anand Rajan claimed one wicket each.

Rajasthan Royals won the breathtaking match on the fourth ball of the last over with five wickets and enhanced two more points to their account.

Points secured by two teams after the end of the 20th match of the IPL 2012: 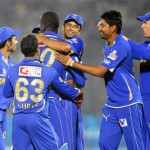 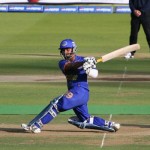 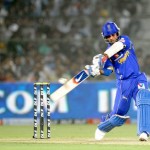