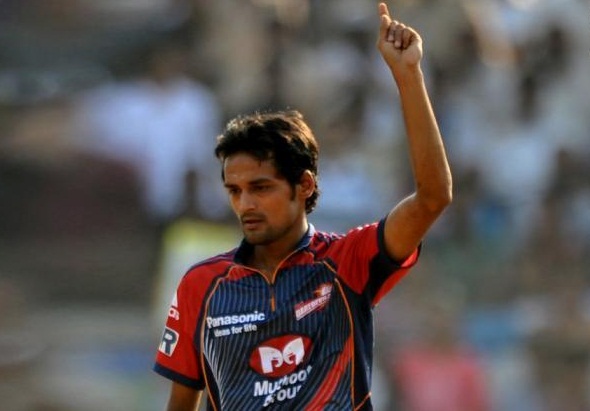 The lethal bowling attack of Delhi Daredevils ripped through the batting of Mumbai Indians and disgraced them in the one sided affair.

Mumbai Indians were bowled out on lowest total of 92 runs in the Indian Premier League 2012 with four balls to spare. Delhi Daredevils achieved the target by scoring 93 runs after losing just three wickets in 14.5 overs.

Shahbaz Nadeem (Delhi Daredevils) was declared ‘Player of the match’ for the initial break through provided by him.

The 19th match of the IPL 2012 was played at Wankhede Stadium, Mumbai on April 16, 2012 and the home crowd felt depressed after the dismal performance of Mumbai Indians.

Earlier, the captain of Delhi Daredevils, Virender Sehwag, won the toss and offered the batting to the Mumbai Indians. Richard Levi and Davy Jacobs opened the innings while Irfan Pathan ended up his first over as a maiden. The left arm spinner, Shahbaz Nadeem was introduced from the other end by Sehwag and he clean bowled Jacobs for a duck on the fifth ball of his first over. Nadeem surprised Levi on the first ball of his second over by uprooting his stumps when the batsman had scored just one runs.

Mumbai Indians lost both their openers for just five runs when Rohit Sharma came in the centre and watched the wickets crumbling at the other end one after the other. The middle order batting collapsed and Sharma was the fifth batsman who went back to the pavilion for 29 off 27 balls with 5 fours. The Mumbai Indians captain, Harbhajan Singh found himself stranded at one end as he tried to push the score at his own and dispatched one six and two fours in the 12th over off Ajit Agarkar.

Harbhajan was the top scorer with 33 from 22 deliveries with the help of one six and five fours and nine of their batsmen were unable to touch the double figures. The innings of Mumbai Indians was folded back for just 92 runs in 19.2 overs and they set a nominal target of 93 runs for the visitors to win the game.

Delhi Daredevils started off with Naman Ojha and Virender Sehwag as the latter initiated the attack by sending the fourth ball of the first over flying across the backward point boundary for a six. The next three overs produced 14 runs with one boundary as the duo scored 12 runs in the fifth over with one four from each. The first wicket contributed 34 runs in 5.1 overs when Ojha was caught by Harbhajan at short midwicket off RP Singh for 13.

Kevin Pietersen came in next and added seven runs in the next four deliveries as Sehwag was dropped at third man boundary by Richard Levi off RP Singh for 16 runs. Pietersen was gone after scoring nine runs as Mahela Jayawardene associated 22 runs partnership with Sehwag who lost his wicket for 32 scored off 36 balls with one six and two fours.

Jayawardene and Ross Taylor took no chances and crept to the target and the latter scored the winning single on the fifth ball of the 15th over as both batsmen remained unbeaten for 17 and11 runs respectively.

RP Singh was the top wicket taker with two and Pragyan Ojha chipped in with one wicket.

Delhi Daredevils won the match comprehensively by a huge margin of seven wickets, added two points in their tally and are ruling the points table at the moment.

Points secured by both teams at the end of the 19th match of the IPL 2012: