Graeme Smith powered a double ton whereas AB de Villiers was heading towards the same direction and they guided their team for a possible win vs. Pakistan.

The hosts were dismissed for just 99 runs in their first innings and the Proteas amassed 460 for the loss of four mere wickets in 134 overs.

Earlier, the visitors started off at 3-128 in 49 overs whereas their skipper, Graeme Smith and Dale Steyn were at the crease for 67 and 3. Mohammad Irfan removed the latter for seven as AB de Villiers got together with his captain who carried on with his solid batting. The home bowlers were unable to stop the flow of the runs and Smith smashed his 27th Test hundred with a four.

Lunch was taken at 4-198 in 75 overs and de Villiers reached his fifty after the break with the assistance of eight fours. The duo was sending the ball out of fence at will as Graeme Smith dispatched three consecutive fours to Saeed Ajmal and went past the 150 runs mark. AB de Villiers posted his 17th Test ton with another four and the rival bowling was looking ordinary against the well settled pair. Smith blasted his fifth double Test ton along with 9000 runs in the longer version of the game and remained unbeaten for 227 off 367 balls with 16 fours. AB de Villiers secured his end at 157 from 262 with 1 six and 16 fours as the Proteas hammered 4-460.

South Africa has grabbed a mammoth first innings lead of 361 runs and Pakistan requires a miraculous batting to save the Test which has already slipped away from their hands. 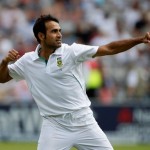 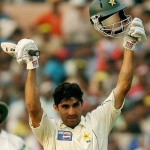