The Black Caps dominated the two match Twenty20 series against the Windies as Luke Ronchi sparkled in his consecutive game with an aggressive unbeaten fifty.

The Caribbeans managed 159 runs while losing half of their side in 20 overs and the Kiwis powered 163 with four wickets remaining and six balls to spare.

Luke Ronchi (New Zealand) was declared ‘Player of the match’ for his breezy unbeaten knock of 51 from 28 mere balls.

The second and final T20 of the series was played on Wednesday, January 15, 2014, at Westpac Stadium, Wellington.

Earlier, Dwayne Bravo, the skipper of West Indies, won the toss, opted to bat first and lost the openers at 37 in 5.5 overs. Andre Fletcher secured his end while adding few runs as the visitors lost their fourth wicket at 67 in 10.3 overs. Denesh Ramdin walked in next and picked up the run rate with Fletcher. The latter was run out for 40 as the score touched 137 while his partner kept on cruising at his end. Ramdin achieved his maiden T20 fifty and remained unbeaten on 55 off 31 deliveries with 3 lofty sixes and even fours as the Windies reached 5-159.

Adam Milne was the highest wicket taker with two whereas Mitchell McClenaghan held one each.

The hosts started off briskly but went down by a couple of wickets at 36 in 2.5 overs. Ross Taylor got together with Brendon McCullum who was gone after adding 13 runs to the total for 17. The home side was reeling at 5-79 after 10.3 overs when Luke Ronchi associated with Taylor and they controlled the game according to the situation. The duo contributed 68 runs for the sixth wicket in 43 balls as Ross Taylor departed for 39. Ronchi attained his half century in the process and held his crease for 51 from just 28 with 2 big sixes and 4 fours as the Black Caps amassed 6-163. Jason Holder, Sunil Narine and Andre Russell shared two wickets each.

New Zealand won the encounter with a margin of four wickets and clinched the series at 2-0. 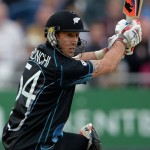 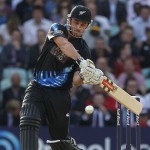 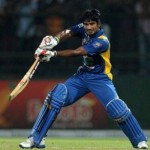