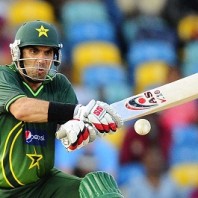 Misbah-ul-Haq once again led his team from the front by playing a responsible knock well assisted by Ahmed Shehzad and his bowlers as Pakistan beat West Indies.

West Indies scored 242 runs after losing 7 wickets in the allocated 50 overs and Pakistan went past their target by scoring 6-243 in 49.5 overs. 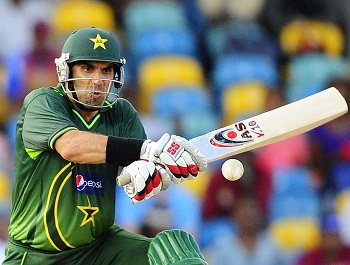 The fifth and final One Day International of the series was played on Wednesday, July 24, 2013, at Beausejour Stadium, Gros Islet, St Lucia.

Earlier, Misbah-ul-Haq, the skipper of Pakistan, won the toss and invited the Windies to bat first. Johnson Charles along with Devon Smith opened the innings slowly and scored 18 runs in five overs. Smith hit the first six of the innings in the next over and was gone for 7 whereas the next batsman Darren Bravo followed him after scoring 9 runs. The home side lost their second wicket at 44 in 12.4 overs as Marlon Samuels and Johnson Charles tried to settle things. The latter was dropped at 3 by Asad Ali at his own bowling and Charles hit 4 fours in the coming overs.

Samuels added 11 runs in the 25th over with 1 six and 1 four and Charles became the next victim at 98 at his personal score of 43 off 71 balls. Chris Gayle got together with Samuels and they crept to 113 after 34 overs but gathered 16 runs in the next one with 1 six and 2 fours. Gayle was smartly caught behind by Umar Akmal off Junaid Khan for 21 and Marlon Samuels lost his wicket for 45 off 89 with 1 six and 2 fours. The Caribbeans were 6-170 in 44.1 overs when their captain, Dwayne Bravo took charge and played a breezy knock of 48 off just 26 deliveries comprising 3 lofty sixes and 5 fours. West Indies smashed 242 runs with three wickets remaining in 50 overs.

Junaid Khan was the pick of the bowlers with three wickets whereas Mohammad Irfan and Saeed Ajmal held two each.

Nasir Jamshed along with Ahmed Shehzad went off to a nice beginning for the visitors by scoring 25 runs in five overs with 1 six and 3 fours. They were going smooth and reached 51 in 10.5 overs when Nasir Jamshed was unluckily run out on the call of his partner for 23. Mohammad Hafeez was gone 13 runs later after scoring 11 runs and was replaced by Misbah-ul-Haq. The run rate was slowed down a bit after the fall of the second wicket and the next boundary was witnessed in the 22nd over.

Ahmed Shehzad attained his third fifty plus score of the ODI in the 25th over as he has already two hundreds to his credit. The Green Shirts went past the hundred runs mark in the next one and the run rate was picked up after that. The smooth looking third wicket partnership was broken at 123 in 30.2 overs when Ahmed Shehzad was caught by Dwayne Bravo off Tino Best for 64 from 100 deliveries comprising 8 fours. The incoming batsman, Haris Sohail, contributed 37 runs for the fourth wicket before he was caught by Lendl Simmons off Tino Best for 17.

Umar Akmal associated next with Misbah-ul-Haq and they kept the score board moving. The first dispatched 3 fours in the 41st over bowled by Jason Holder and his partner added another two boundaries in the next one. Misbah-ul-Haq survived a huge caught behind appeal at 49 in the 43rd over even after a review and attained his 29th ODI fifty. The Green Shirts required 42 runs to win the game in 30 balls and Umar Akmal became the fifth victim after scoring  a valuable 37 off just 28 with 1 six and 5 fours. Shahid Afridi scored 12 runs in the 49th over with 1 six and 1 four as Mishbah-ul-Haq was caught by Dwayne Bravo off Holder for 63 from 93 with 1 six and 5 fours. The target was achieved on the fifth ball of the last over by scoring 6-243 runs.

Tino Best was the highest wicket taker with three whereas Darren Sammy and Jason holder shared one wicket each.

Pakistan won the final encounter against West Indies by a margin of four wickets and grasped the series 3-1. 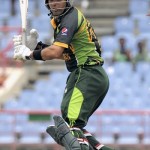 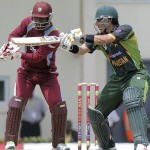 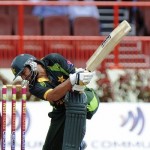 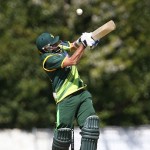