The Proteas plundered five hundred plus runs in their first innings, removed four top order batsmen of Pakistan and foresee a clear win on the final day.

The play of the fourth day’s play completed on Friday, October 26, 2013, at Dubai International Cricket Stadium.

Earlier, the Proteas commenced the day at 4-460 after 134 overs whereas Graeme Smith and AB de Villiers were batting at 227 and 157 runs. The latter was gone after adding seven runs and Smith lost his wicket for 234. Saeed Ajmal became unplayable and Faf du Plessis was the only lower order batsman who touched the double figures as the tourists piled up 517 in 163.1 overs.

Saeed Ajmal was the star performer with six wickets, Mohammad Irfan got three whereas Zulfiqar Babar held one wicket.

Pakistan conceded a first innings huge lead of 418 runs and had a dismal beginning of their second by losing both their openers for a duck. Azhar Ali along with Younis Khan preferred to defend and played quite a few maiden overs. They crept to 48 in 25.1 overs when the first left the crease for 19 and Younis Khan was clean bowled by Imran Tahir for 36. The skipper of Pakistan, Misbah-ul-Haq once again proved his worth as one of the most competent batsmen in the side and negotiated the bowling at merit. Asad Shafiq batted well at the other end and remained unbeaten for 28 whereas his senior partner secured his other end at 42 as the hosts reached 132 in 55 overs.

South Africa still holds a mighty first innings lead of 286 runs and requires another six wickets to clinch the match. 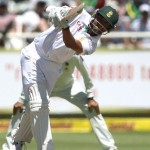 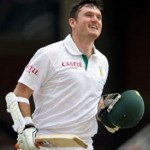