The Indian spinners continued their dominance against the batsmen of the visiting West Indies who were bowled out cheaply once again in the series.

The Caribbeans were dismissed for 182 runs and India gave a sterling reply by scoring 157 for the loss of just two wickets.

The 200th and the final Test for the great little master, Sachin Tendulkar, and the second game of the series commenced on Thursday, November 14, 2013, at Wankhede Stadium, Mumbai, with a sell out arena.

Earlier, MS Dhoni, the skipper of India, won the toss and invited the Windies to bat first. Chris Gayle failed once again with the bat and was gone for 11 while Darren Bravo and Kieran Powell tried to stabilise the innings. They steadied the game at a reasonable pace and took the score to 86 when Bravo became the next victim for 29. Powell followed him 11 runs later for 48 as Shivnarine Chanderpaul appeared with the bat in his 150th Test and joined in with Marlon Samuels.

The latter remained shaky throughout his 59 balls stay at the crease and was finally dismissed for 19. Chanderpaul and Narsingh Deonarine were the only batsmen who occupied the crease for 25 and 21 and the innings of the visitors was folded back for 182 in 55.2 overs.

Pragyan Ojha was the star performer with five wickets, Ravichandran Ashwin held three whereas Bhuvneshwar Kumar and Mohammed Shami shared one wicket each.

Murali Vijay and Shikhar Dhawan started off swiftly while dispatching frequent boundaries to the rival bowlers. They powered 77 runs in 13 overs with 8 fours from the first and 7 off the latter. Dhawan departed at that point for 33 off Shane Shillingford and Vijay was caught by Darren Sammy at the bowling of the same bowler after contributing 43.

The greatest batsman of all times, Sachin Tendulkar, walked in next and got a rousing welcome by the crowd present at the stadium whereas he received a guard of honour from the West Indies team.

The little master associated with Cheteshwar Pujara as the score went past the hundred runs mark in the 19th over with a four from the first. The duo kept on consolidating the innings and saw the day off at 157 without any further loss. Sachin Tendulkar was unbeaten at 38 with 6 fours and Pujara was at the other end for 34 comprising 4 boundaries.

India is just 25 runs away from the first innings total of the West Indies and the hosts will anticipate a big lead with eight wickets still in hand. 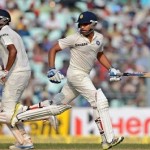 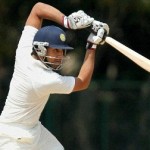 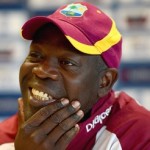