The most senior batsman of Pakistan, Younis Khan, along with a junior, Asad Shafiq, brought prosperity to Pakistan after an early collapse vs. South Africa.

The top order batting of the visitors once again struggled against the quality fast bowling of the Proteas in the beginning as four batsmen went down cheaply for 33 runs. Younis Khan and Asad Shafiq revived the innings as Pakistan recovered and scored 253 runs for the loss of five wickets at stumps at day one.

Earlier, Graeme Smith, the captain of South Africa, won the toss and put Pakistan in to bat, keeping in view their poor batting performance in the first Test which was lost by the visitors by a huge margin of 211 runs. The innings was opened by Mohammad Hafeez along with Nasir Jamshed in a completely defensive manner and they scored just 10 runs in the first seven overs. Nasir Jamshed was dropped by Faf du Plessis at gully off Vernon Philander on the second ball of the next over. The batsman was unable to utilize the chance and was caught behind by the wicketkeeper AB de Villiers on the very next delivery for three runs.

The first four of the innings was hit by Mohammad Hafeez in the 10th over who became the next victim for 17. The tourists were put in the corner by Morne Morkel in the 17th over when he got rid of Azhar Ali and the Pakistani skipper, Misbah-ul-Haq for 4 and 0 runs respectively. Pakistan was in dire trouble at 4-33 in 17 overs and looked like having another collapse like the one witnessed in the previous Test. They were bowled out for 49 mere runs in their first innings of the opening match on February 1st, 2013, at Johannesburg.

The seasoned campaigner, Younis Khan, and the promising youngster, Asad Shafiq, put their heads down in a critical situation and survived a few anxious moments at the crease.  The duo did not take any undue risks and crept to 60 after 27 overs at the lunch interval. They kept on consolidating after the break and reached 85 after utilising 42 overs. Asad Shafiq was dropped on the fourth ball of the following over at 24 by Dean Elgar off Robin Peterson and the batsman hit a four on the next ball he faced.

The first hundred of the innings was posted on board in the 47th over with the help of a four from Asad Shafiq. Younis Khan dispatched the first six of the innings in the 55th over that brought his 27th Test fifty as well. Asad Shafiq attained his 8th half century in the longer version of the game, he completed his 1000 runs in Test cricket and the 100 runs partnership was also recorded. The pair was reading the ball perfectly as Asad Shafiq added 14 runs in the 61st and next over with 3 fours followed by another 13 runs in the 71st over with 1 six and 1 four.

Younis Khan continued with his solid knock from the other end with occasional boundaries and the second hundred of the innings was displayed on board in the 74th over. Both batsmen were especially severe on Robin Peterson and Younis Khan punished him with a couple of sixes and thrashed his 21st Test century in the 78th over. The brilliant young gun, Asad Shafiq powered his third Test hundred with a four on the fourth delivery of the 80th over and the 200 runs partnership was also attained in that over.

Graeme Smith took the new ball in the next over and the score was enhanced to 252 after 87 overs. Younis Khan was gone in the next over after playing a masterly innings of 111 off 226 balls comprising 3 glorious sixes and 7 fours. Asad Shafiq remained unbeaten for 111 from 229 with 1 six and 14 fours as Pakistan scored 253 runs in 90 with five wickets remaining.

Vernon Philander and Morne Morkel were the top wicket takers with two each whereas Dale Steyn held one.  The left arm leg spinner, Robin Peterson was the most expensive bowler of the day with a figure of 19-0-85-0.

Pakistan has done well at the end of the first day’s play and an addition of another 100 -125 runs to the total can put them in a string position. South Africa will try to grab some early wickets to get back in the game and Asad shafiq can prove to be a dangerous man for them. 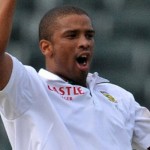 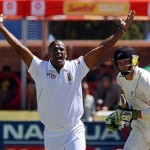