Kevin Pietersen continued his assault on Pakistani bowling, his last ball six made a difference as Pakistan lost the third Twenty20 by five runs.

Pietersen was rightly declared ‘Player of the match’ for his tremendous performance with the bat as he smashed unbeaten 62 runs while opening the innings.

Earlier, Stuart Broad won the toss and sent his batsmen to post a reasonable score on board. Kevin Pietersen and Craig Kieswetter started of moderately and 11 runs were scored in the first two overs. The later dispatched a four and six in the next over from Umar Gul and collected 12 runs altogether.

Kieswetter was gone at his personal account of 17 when he was caught smartly at long on by Shoaib Malik off Saeed Ajmal. The opening partnership produced 29 as Pakistan took a strong hold of the match and the batsmen found it hard to negotiate with Ajmal.

Pietersen secured one end as the wickets were tumbling at the other end and the next four batsmen were unable to enter the double figures. England had lost five wickets for 89 in 15.4 overs when Samit Patel gathered quick 16 runs off 10 balls with one six and a four. Pietersen remained unbeaten on 62 scored off 52 balls with the assistance of one six and 6 fours as the visitors managed 129 runs for the loss of six wickets in the allotted 20 overs.

Saeed Ajmal once again proved his worth in the game while grabbing four wickets and Aizaz Cheema held one.

Pakistan got an early set back when Mohammad Hafeez once again failed with the bat and was gone without opening his account. Awais Zia was joined in with Aasad Shafiq and both polarised the innings with determination and no undue risk was taken. They shared 40 runs at excellent rate when Graeme Swann struck and Aawais was declared leg before wicket for 23 off 28 balls which included one six and a four.

The second wicket was lost at 48 runs as Pakistani Captain, Misbah-Ul-Haq promoted him up in the batting order and entered in the centre. They kept the score board moving regularly and Shafiq dispatched successive boundaries to Broad in the 11th over. He was reading the ball well when an unnecessary attempt for the second run was made and was run out for 34 off 32 deliveries with two fours.

Umar Aakmal joined his skipper after the fall of the third wicket at 76 and both started their march towards the target. Pakistan required 17 runs from 12 deliveries and Broad delivered an excellent 19th over where he got the important wicket of Akmal and gave away just four runs.

The runs were difficult to come and the boundaries were hard to find when the Green Shirts crept to 113 as Akmal was caught by Swann off Broad for 22. Pakistan was unable to score 13 runs in the last over as Jade Dernbach gave away just seven runs and Misbah was bowled on the last ball when he tried to get the winning six runs.

Misbah scored 28 runs off 32 balls with two fours as Pakistan could get 124 runs for the loss of six wickets.
Dernbach was the supreme bowler who gave a match winning performance, held two wickets as Broad and Swann claimed one wicket each. 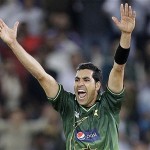 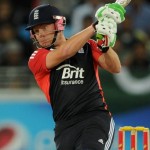 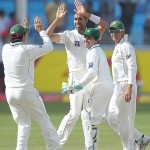 Pakistan bulldozed England in the third Test while creating history