The Sri Lankan Captain, Mahela Jayawardene led the team from the front against the lethal bowling attack of England by thrashing unbeaten 168.

The Lankan Lions scored 289 runs for the loss of 8 wickets at stumps in their first innings on the first day of the first Test vs. England.

The opening Test of the two match series started on March 26, 2012 at Galle International stadium.

Earlier, Sri Lanka won the toss and elected to bat with a vision to put a reasonable first innings total on board. They had a disastrous start when three of their top order batsmen, Lahiru Thirimanne, Tillakaratne Dilshan and Kumar Sangakkara were sent back to the pavilion for mere 15 runs in 3.5 overs as James Anderson and Stuart Broad struck for England early in the innings.

The first wicket of Thirimanne fell on the second ball of the third over when Mahela Jayawardene walked in and witnessed his top batsmen surrendering against the rival pace attack. Thiramanne and Sangakkara were dismissed on the successive deliveries of the third over which was bowled by Anderson. The third wicket of Dilshan was lost on the fifth ball of the fourth over when the experienced Thilan Samaraweera joined in with his captain.

Jayawardene opened his account with a boundary on the third ball of the fifth over and added another on the last ball of the same over. The English bowlers checked the flow of runs immediately and the batsmen could score just 43 runs in the next 25 overs. The score was enhanced to 67 runs when the Islanders faced another blow as Samaraweera was unluckily run out for 20 runs while attempting an unnecessary run.

The fourth wicket was lost at 67 runs as the young Dinesh Chandimal walked in the centre and Jayawardene decided to attack the rival bowlers. He dispatched three fours in the 35th over of Anderson and completed his fifty on the fourth ball of the 45th over. Chandimal was also attacking at the other end and sent the ball flying over the ropes for a couple of times and the consolidation process was continued.

The duo took the score to 128 when Chandimal was caught at cover by Ian Bell off Samit Patel for 27. It was the first Test wicket for Samit Patel and he was congratulated by all his team mates  for opening his account. Jayawardene consolidated at one end as the wickets kept on falling at regular intervals with a nominal contribution from the other end. He got a life at 90 runs after James Anderson dropped a caught and bowled chance in the 68th over.

Jayawardene succeeded in banging his 30th Test ton on the first ball of the next over as the ball rolled over the fence. He took over the responsibility of scoring as a senior partner and the runs were being added frequently with odd boundaries. Patel got his second wicket when Rangana Herath became the eighth victim for five runs after sharing a useful partnership of 62 runs with his skipper.

The eighth wicket was gone at 253 runs as Chanaka  Welegedara  walked in, took guards and defended the bowling at his best. Mahela Jayawardene was dropped by Monty Panesar for 147 when the ball slipped through the fielder’s hand, off James Anderson. Panesar again dropped him on the second ball of the 84th over at 152 runs on the bowling of Broad.

Sri Lanka cruised to 289 with two wickets still in hand whereas Jayawardene was unbeaten for 168 and Welegedara was still at the crease with 10 runs.

The home side will be delighted if Jayawardene can dispatch his double hundred and the last two wickets can accumulate as many runs as possible. England will try to wipe off the tail in minimum time and restrict them to a reasonable score. 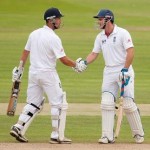 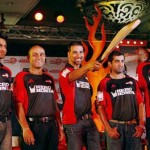