The middle order batsman of England, Kevin Pietersen, rescued his side with an unbeaten fifty when most of the batsmen surrendered even after a reasonable start.

The visitors managed 226 runs for the loss of six wickets in 89 overs at stumps.

The first day of the fourth Ashes Test concluded on Thursday, December 26, 2013, at Melbourne Cricket Ground.

Earlier, Michael Clarke, the skipper of the Kangaroos, won the toss and offered the batting to the tourists. The rival captain, Alastair Cook, along with Michael Carberry provided a nice beginning to their team. They saw off the new ball by scoring 48 runs in 16.5 overs when the first was gone for 27 and was replaced by Joe Root. The run rate was dropped a bit and the Englishmen reached 71 in 27 overs at lunch interval.

Carberry was clean bowled by Shane Watson for 38 as the score touched 96 and Root followed him 10 runs later for 24. Ian Bell and Kevin Pietersen took the responsibility of stabilising their side without taking any risk. They crossed the 150 runs mark in the 60th over and the fourth wicket partnership was broken at 173 as Bell departed for 27. Kevin Pietersen kept on cruising at his end and attained his 35th Test fifty whereas a couple of wickets fell at the other end. He was batting at 67 and Tim Bresnan was assisting him at one as England reached 226 after consuming 89 overs.

Ryan Harris and Mitchell Johnson were the top wicket takers with two each whereas Peter Siddle and Shane Watson shared one wicket each.

England will anticipate a big knock from Kevin Pietersen to remain in the game while Australia is capable of wiping off the tail at ease. 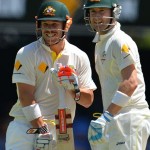 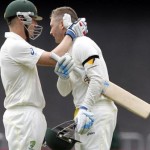 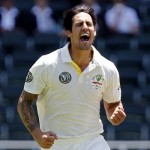