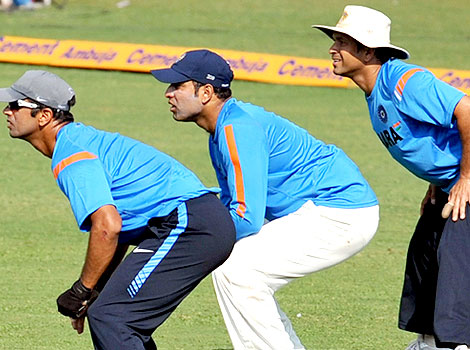 This will be India’s last away Test series for the next two years. And Rahul Dravid, Sachin Tendulkar and VVS Laxman are not getting any younger. So in all probability, this would be the last trip Down Under for the three existing players of the ‘Fab five’ of the Indian team atleast while playing together, if not individually. This is the time for them to win in what could be called their ‘Final Frontier’, even as I am not certain whether the trio would think of the result all the time on the trip.

Australia remains one of the toughest places for touring teams to win a series in, and it is only recently that the likes of South Africa and England have prevailed and New Zealand have leveled series. And these three know it better than anyone else in world cricket at the moment. This will be Tendulkar’s fifth trip to Australia while Dravid and Laxman have made it four times out there. Despite that, India have never won a Test series in Australia although they have managed to pull off atleast one victory in a series in the last two trips and the fact that the trio has done exceptionally well against the Aussies throughout their long careers.

Winning hearts is one thing, but winning a series is another. Tendulkar remains the most revered foreign player in Australian soil ever since he scored a painstaking 114 against the hosts at Perth, which is one of the fastest pitches in the world till date at a tender age of 18. However, India were whitewashed in that series. When he next came, he was the captain of the Indian side and single handedly fought it out against an Australian attack comprising of Glenn McGrath, Shane Warne, Brett Lee and Damien Fleming. But that tour was another whitewash as Tendulkar had no one to support him when it came to batting or captaincy for that matter.

Four years later, he scored a significant 241 at Sydney which was critical in holding the Aussies to a draw and India retaining the Border Gavaskar Trophy by leveling the series which was a massive achievement then. Come 2007, and although that series was filled with bitterness amongst both sides, Tendulkar’s century again at Sydney wooed even the most ardent of Australian supporters and another hundred at Adelaide avoided India a defeat and made him the highest run-getter of the series. Yet, Australia won the series 2-1.

As for Dravid, he had a miserable tour of 1999 when he averaged a mere 30. But in 2003, there was no better sight than seeing him emotional after kissing the crest of his cap when he hit the winning runs in the Adelaide Test after scoring a mighty 233 in the first innings. He did give India a 1-0 lead in the 4 Test series but could not help them win the series despite ending as the man-of-the-tournament alongside one of his admirers, Aussie ex-captain Ricky Ponting. And in 2007, Dravid once again failed as that was the period when he was in the biggest slump of his career. If he had contributed, India could have atleast leveled the series again, if not win. This time, though he is in top form being the highest run-getter of 2011 and it would not be astonishing to see a déjà vu of 2003 from him.

Laxman has always been added salt to Aussie wounds, since the beginning of his career. In 1999, he ended as the second highest run-getter in the series after scoring 169 in Sydney which actually made the cricketing world get a glimpse of him for the first time. After Kolkata 2001, Laxman decided to let his artistry with the bat take on the Australian aggression. And he alongside Dravid caused misery to Australia in Adelaide in 2003 as his 148 in the first innings was crucial in India getting close to the hosts’ massive total. His tour did not end there. At Sydney (yet again!), his 178 alongside Tendulkar’s 241 made India reach their highest Test score of 705, which was enough to prevent Australia to take a win and leveling the series. His consistency next time around was yet again in a lost cause since India could not win the series.

This time though, the tables have turned. Australia is in its most vulnerable position in recent times and is not the same, threatening team of the past. While India has a much stronger batting lineup and has all sorts of bowlers who can benefit from the fast, bouncy tracks Down Under. Besides, India have beaten Australia in five out of the last eight Tests played between each other and incidentally Australia’s last win against India was the controversial Sydney test match of 2007.

So, it is in the hands of these three wise heads to take advantage of a young Australian bowling attack and lead India to a series win finally, in their careers. They can also take inspiration from the fact that Australia won a series in India in 2004 after so many attempts with several legendary players in their side, taking full advantage of a weakened Indian team and that would always remain a souvenir in the minds of Matthew Hayden, Justin Langer, Adam Gilchrist (who led the team on the tour in the absence of Ponting), Shane Warne and Glenn McGrath to name a few.

Rahul Dravid captained India to series wins in England and West Indies and a first ever Test match win in South Africa as well. He played an important role in winning a first-ever Test series in Pakistan as well and in New Zealand too, to a certain extent. Tendulkar and Laxman have played an integral part in these victories as well. Though they might hope to achieve wins in South Africa and Sri Lanka soon, but you do not get everything you desire in life. However, winning in Australia is for sure the strongest desire of them all and if the team is not inspired enough to fulfill this desire of the trio, then it will be one of the biggest regrets in their lifetime when telling stories to their grandchildren.

A chapter called ‘Success in Australia’ would make Indian cricket proud too and would lead the future generation of cricketers to do well there.