A dismal performance by New Zealand batsmen in the second innings of the first Test against Australia let them down enabling the hosts to win the encounter easily by nine wickets on the fourth day.

The Black Caps were dismissed for 295 runs in the first innings and the Kangaroos responded with 427 and got a vital lead of 132 runs. The visitors surrendered against the hostile bowling of hosts in their second innings and the whole team was sent back reeling at 150 runs. Australia required just 19 runs to win the match which was achieved for the loss of one wicket.

The five days Test was played at Brisbane Cricket Ground, Woolloongabba, Brisbane, which was started on December 1, 2011, but ended a day earlier than schedule. 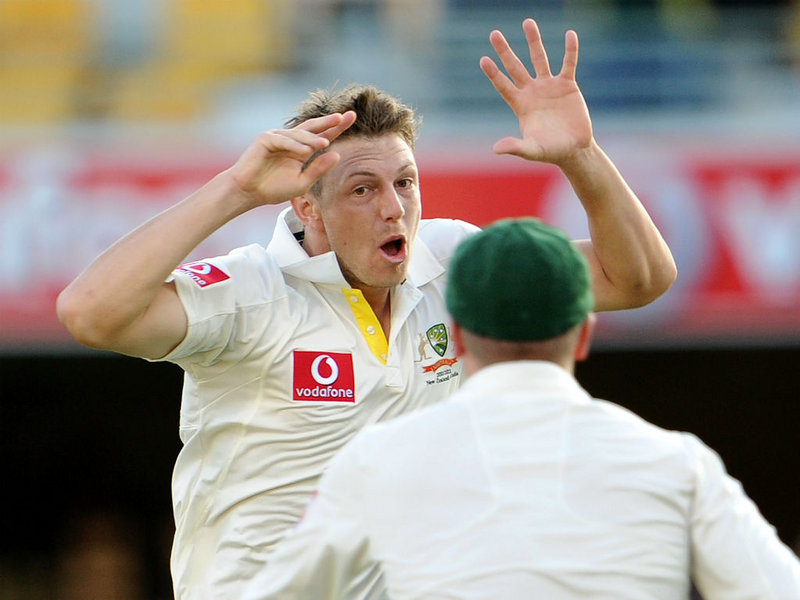 The pacer James Pattinson was declared ‘Player of the match’ due to his timely five wickets haul in the second innings.

Earlier the Kiwi’s were fighting at 10 after losing one wicket in seven overs at the end of the third day’s play and a tough fight was expected from them on the fourth day. Martin Guptill and Doug Bracewell were unbeaten on seven and 0 runs respectively in the tense moments of the day. Pattinson got the important wicket of Brendon McCullum who was caught in the second slip by Ricky Ponting.

Peter siddle initiated attack and Guptill dispatched the first ball for a rolling boundary past mid-off and seven runs were added in the first over.

Pattinson was brought in from the other end and straight away put New Zealnd in trouble.

Guptill was caught at short leg by Usman Khawaja on the second ball at his individual score of 12 runs. The second wicket fell at 17 runs and in came Kane Williamson who was caught by the wicket keeper Brad Haddin on the fourth ball of the over.

The Black Caps were in dire trouble after losing three wickets for mere 17 runs when Captain Ross Taylor appeared on the scene and much was expected of him. He could not survive and lost his wicket on the first ball he faced from Pattinson and once again caught at the wicket by Haddin. The youngster was in sight of a hat-trick in his debut match which was avoided by the new comer Jesse Ryder.

The top order of the visitors was crushed by Pattinson and they were whirling at 17 runs after losing their four top order batsmen. Ryder tried to force the pace and hit couple of boundaries before Pattinson hit back again by sending back Bracewell at his individual score of just two runs.

The fifth wicket fell at 28 runs when Dean Brownlie came to the crease and joined with Ryder. They added 41 runs for the sixth wicket as Ryder went back to the pavilion after contributing 36 runs. Brownlie gave little resistance to the lethal bowling attack of Australia by scoring 42 runs as the whole team was bowled out at 150 runs in 49.4 overs.

Pattinson was the pick of the bowlers from the Kangaroos by grabbing five wickets, off spinner Nathan Lyon chipped in with three wickets as Peter Siddle and Michael Hussey claimed one wicket each.

Australia required just 18 runs to win the first Test which was achieved comfortably by the loss of one wicket. They won the match by nine wickets and are 1-0 up in the two Test series.