The best opening stand of 179 runs in the Commonwealth Bank Series by Tillakaratne Dilshan and Mahela Jayawardene put Australia in the corner as Sri Lanka won the second final by a massive margin of eight wickets.

The Kangaroos scored 271 runs for the loss of six wickets at the end of the metered 50 overs and the Islanders achieved the target by dispatching 274 for mere two wickets with 5.4 overs to spare.

Dilshan was declared ‘Player of the match’ for his outstanding all round performance in the match played at Adelaide Oval on March 6, 2012.

Earlier, Michael Clarke succeeded to win the toss, opted to bat with the availability of their in- form opener David Warner who was a doubtful starter duo to groin injury sustained during the first final. They lost the early wicket for 22, Shane Watson was unable to utilise the two drop chances and was gone for 15.

The second wicket fell at 56 when the responsible captain, Clarke joined in with the established Warner. The later continued consolidating and posted his fifty in the 26th over as Clarke kept on securing the other end while adding useful runs.

Clarke opted to force the pace, reached his fifty in the 35th over and survived on the third ball of the 41st over when he was dropped by Nuwan Kulasekara off Rangana Herath at 71 runs. The poor catching of the Islanders continued as he was again dropped six runs later by Lasith Malinga on the square leg boundary off Farveez Maharoof . The skipper exploited the chance while adding aggression to his innings and completed his ton ahead of Warner on the fifth ball of the 45th over.

David Warner joined the century club by smashing his consecutive ton in the finals on the first ball of the next over but Dilshan took an excellent catch off Malinga and got rid of him on 100 runs. Clarke tried to accelerate the run rate but was unluckily run out for 117 off 91 with 4 lofted sixes and 5 fours as the home side got a reasonable total of 271 after losing six wickets in 50 overs.

Malinga was the most successful bowler with three wickets, Dilshan held one while opening the attack and there were two run outs.

The Lankan Lions initiated the innings with their seasoned duo of Mahela Jayawardene and the ever reliable Tillakaratne Dilshan as they made their intentions clear by dispatching 12 runs in the very first over. The offensive was continued and they dispatched 74 runs in the first ten overs of the power play.

The assault was continued by them and the first hundred of the innings was measured up in the 16th over. Dilshan attained his fifty in the 16th over and Jayawardene followed him on the fifth ball of the 19th over. The duo opened up after that, minimum one boundary was scored in each over and the rival bowling was on their mercy.

The first wicket produced 179 runs which was a record partnership of the series as Jayawardene was declared leg before wicket at the bowling of James Pattinson for 80 off 76 deliveries which comprised one six and 8 fours. The wall of the Lankan batting, Kumar Sangakkara was the next danger man for the rivals who came in and joined with Dilshan. The later celebrated his century on the fourth ball of the 35th over as the first opened up his arms by directing the ball to the fence quite often.

The second wicket was gone at 234 runs when Tillakaratne Dilshan was caught at deep mid wicket by Michael Hussey off Brett Lee after smashing 106 on 119 balls with the assistance of 10 sweetly timed fours. The young Dinesh Chandimal came in next but Sangakkara took charge of the situation, sent the second ball of the 45th over rolling out of the rope, completed his fifty and secured empathetic victory for Sri Lanka.

The Lankan Lions butchered the bowling of Australia, triumphed by a huge margin of eight wickets and levelled the finals 1-1.

The third final will be staged at Adelaide Oval on March 8, 2012 and the team performs well on the day will lift the trophy. 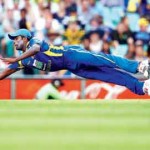