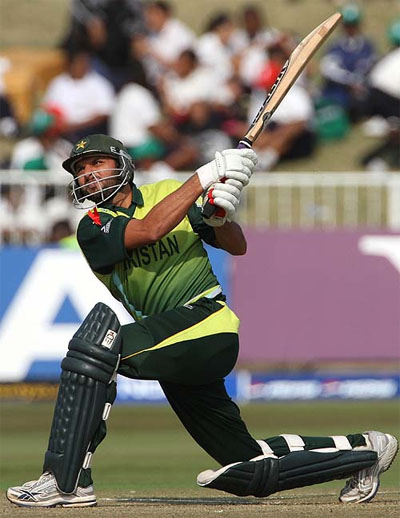 10 Fastest ODI Centuries of All Time

ODI cricket was introduced in the 1970s in order to make cricket a short, yet exciting event to watch rather than dozing off watching 5 days of Test cricket. So, it goes without saying actually that there have been some thrilling innings to watch in this format of the game which have mesmerized fans over the years and are remembered till date. Indeed, I will be entering the flashback mode in terms of the top 10 fastest scored ODI centuries scored, of all time.

This is enough evidence that how destructive a batsman he has been throughout his career. ‘Boom Boom’ Afridi’s record of the fastest ODI ton ever has been kept intact since the last 15 years.

Coming in at No.3 as a pinch-hitter, he scored 100 runs in 6.1 overs in numerical terms, which is close to 17 runs in every complete over he faced. And shockingly, it involved 11 sixes with a bowling attack comprising of Muttiah Muralitharan, Chaminda Vaas and Kumar Dharmasena.

Sri Lanka, the then recently crowned world champions had no answer to this 16-year old’s onslaught as Nairobi was the fortune venue to have graced this achievement and to see Pakistan pull off an improbable 82-run win.

This innings was the break-through Afridi needed to cement his place in the national team and let the world know off his extra-ordinary hitting abilities. 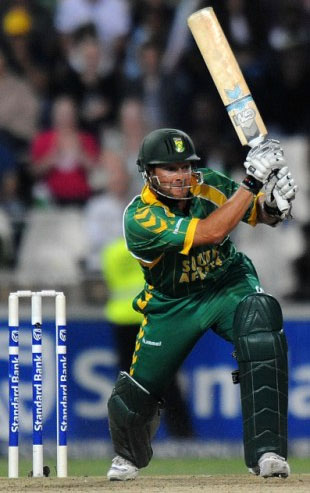 Although Boucher never got enough opportunities to contribute much with the bat since he bats lower down the order, yet many know that the experienced South African stumper is no mut with the bat.

Especially after a match-winning and quickfire fifty against the world No.1 Australian side in a world-record run chase of 434 in Johannesburg a couple of months prior to this innings.

And he got the chance to make it bigger against their African counterparts, Zimbabwe in an ODI at Potchefstroom. Boucher reached his hundred in just 44 balls, which included 26 runs off 1 over bowled by a hapless Justice Chibhabha.

He batted at No.4 and he showed that he can fit into any position in the batting order.

South Africa scored 418 in 50 overs, their second score above 400 in the year and beat Zimbabwe comprehensively by 171 runs to whitewash them 3-0. 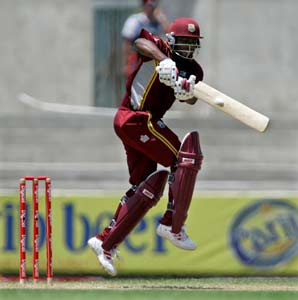 Brian Lara was made captain of the West Indies team after a flop World Cup in England a few months ago.

While his side was still struggling, it was in a two match ODI series against minnows Bangladesh that they could redeem themselves to an extent.

And the Caribbean batting genius led from the front with the bat as he promoted himself to open the batting. In the previous game, he had failed and Lara wanted to make amends for that failure. And what a way to do it! Despite scoring the hundred off 45 balls, he hit only 4 sixes in the process which shows that he might not have the brute power of a Afridi or the calmness of a Tendulkar, yet he can score at a strike rate of 189 by placing the ball well.

This masterclass was enough to demoralize the hosts as West Indies took a series sweep 2-0.

This is as if it is a nomination list for the ‘Best Actor’ award at a film awards function. Once again, it is Sahibzada Shahid Mohammad Khan Afridi who hit a trace-a-bullet century, but this is even more special as this was against archrivals India at Kanpur six years ago. His sixes are as big as his name and this knock was a testament to this.

India set Pakistan a modest target of 250 to win but Afridi ensured that Pakistan won this with more than eight overs to spare. For any team, when he opens the batting, it spells trouble. But this was a nightmarish outing for the Indian bowlers. Lakshmipathy Balaji was smashed for 51 runs in 6 overs, while the other bowlers were ordinary too trying to be defensive. Harbhajan Singh did get his wicket eventually, but it was after Afridi hit as many as ten fours and nine sixes, possessing an incredible strike-rate of 222 which is so T-20 like, isn’t it?

He ensured that Pakistan could not lose the ODI series from there on, and to an extent he could be held responsible for ending Ganguly’s successful reign as India captain at the time. 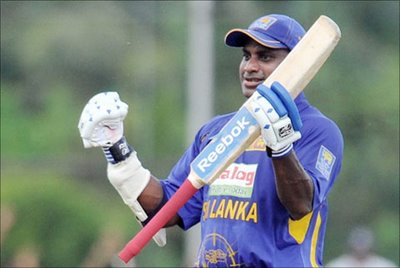 Afridi’s blitz against Sri Lanka in Nairobi could be taken as vengeance as many, to this innings played by Jayasuriya in Singapore.

His aggressive batting at the top of the order was critical in helping Sri Lanka win the World Cup. So it was a month later that this ton was made, and he was in the best of nicks.

Pakistan was clearly missing Wasim Akram and without him, the bowling looked mediocre. Apart from Saqlain Mushtaq, none of the bowlers were much competition to Jayasuriya and he gave no mercy to them.

An equivalent of 11 fours and 11 sixes in the innings made him reach his century in 48 balls, setting the Pakistanis a target of 350 to chase.

However, this match was not entirely one-sided as Pakistan did fight till the end, only to lose by 34 runs. 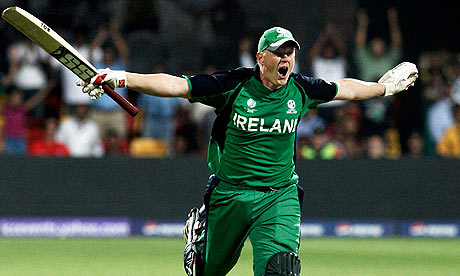 This knock will make an Irish fan celebrate St. Patrick’s Day over and over again. It is because Kevin O’Brien scored these runs against England in a World Cup match in alien Indian conditions and actually won the game.

It looked like England were the firm favourites after posting 327 on the board in 50 overs and restricted Ireland to 111/5 at the half-way of their innings. But the match is not over till the last ball and O’Brien produced a counter-attack out of nowhere, which astonished the English bowlers.

His hundred came off exactly 50 balls and it included 13 fours and 6 sixes, causing one of the greatest upsets not just in World Cup cricket, but in ODI cricket as well. It almost dented England’s chances of making it to the quarterfinals and this was perhaps the only match in the tournament which provided some thrill, not featuring India or any of the subcontinent teams.

This time it is minnows Bangladesh who had to bear the brunt of the power that Shahid Afridi generates with his willow.

He was the captain of the team this time around, making it a special innings of sorts. It also incidentally completes a tally of the fastest centuries each scored by Afridi against all top Asian sides which are Sri Lanka, India and Bangladesh. This innings was played in the round-robin stage of the Asia Cup in Dambulla in Sri Lanka. What is also stunning is that there were just 4 sixes in this innings and the hundred came in 53 balls, so unlike Afridi! Yet, what matters is the most is Pakistan beating Bangladesh by 139 runs and increasing their net run-rate after scoring 385, so that they could qualify for the finals of the Asia Cup.

In the end, that dream did not come true so this innings is not remembered by many and is just a statistic in cricketing books.

The tournament is yet again the Asia Cup and the team to suffer another of the fastest ODI hundreds is Bangladesh, while it is for the second time that Sanath Jayasuriya features in the list.

All this make a recipe for a one-sided disaster to watch, as Jayasuriya whacking bowlers to all parts of the ground is a common feature in his batting. However, what is amazing is that Jayasuriya scored this century at the age of 38, a time when most cricketers lose their reflexes in even holding the bat properly. And that too in 55 balls. He was the first man to be dismissed in the innings, which showed how well he used the powerplay overs to get 16 fours and 6 sixes under his belt.

This start gave Sri Lanka a platform to build a huge total, but even 332 was a formidable total for an inexperienced Bangladeshi batting line-up as Sri Lanka won by a huge margin of 158 runs to qualify for the final of the competition and then beating India in that match to defend the Asia Cup successfully. 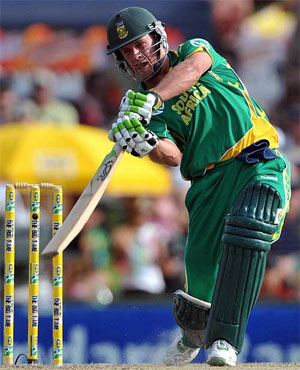 It was in Ahmedabad in 2008 when de Villiers scored a double-century which was monumental in South Africa defeating India for the first time in a Test match since 2000.

Two years later, he returns to the same ground and inflicts similar damage on the Indian bowlers. The only difference is that this was an ODI and it was a much entertaining and faster knock from AB de Villiers.

He found the boundary more frequently than any of the other Protean batsmen throughout the innings and managed only 3 sixes. Yet, he reached three figures in 58 balls and this remains a record for the quickest century in an ODI when the batsman has remained not out till the end of the innings.

Although South Africa had lost the series prior to this game, courtesy Tendulkar’s historic double century, they avoided a whitewash by pulling off a comprehensive 90 run victory. 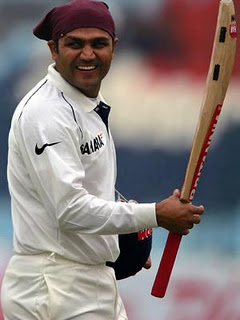 It is a misnomer that Sehwag’s name is present at the bottom of the list when he is by far the most attacking opening batsman in world cricket today.

Anyway, it is an honour for any player to be a part of history.

It was in March 2009 when India toured New Zealand after seven years. However, the Black Caps were at their weakest and Dhoni’s men took full advantage of it in the first two games. This was the third game of the five-match series and India seemed to have developed some complacency as New Zealand scored 270 in 47 overs.

But Sehwag had other ideas. Every Kiwi bowler was punished as he used the small-sized ground to the fullest. He reached his century in exactly 60 balls, and it was almost as if he won India the match single-handedly and in the process, the series too. Gambhir’s steady half-century was forgotten in a hurry due to the mental impact it had on New Zealand for the rest of the tour.

All these players have been extremely successful in ODI cricket and have made the game remain at its maturity stage, although it can go into decline soon due to the growing demand for T-20 cricket. No matter what the conditions are or the opposition is, scoring runs at a quick rate requires immense concentration, physical power and self-belief and these tons should be inspiring enough for youngsters to learn something not just about cricket, but life too.