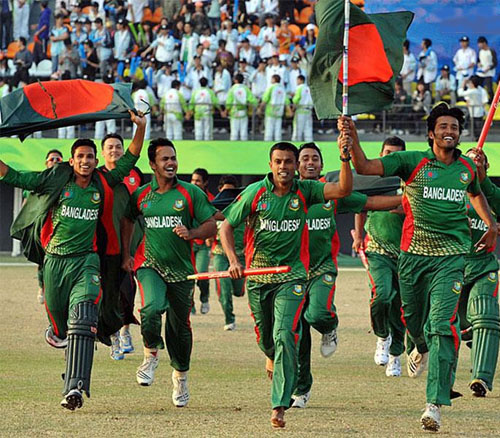 Bangladesh – Promising, but could never live up to expectations

Bangladesh’s cricketing identity was given a shot in the arm after it won the Intercontinental Cup in 1997, which was their passport to playing ODI cricket against top nations.

Akram Khan, the then captain was considered a legend in the cricketing circles and he made a nation’s dream come true. The country then participated in the 1999 World Cup in England and famously upset Pakistan in one of the league matches. It was a glorious period for Bangladesh cricket as consistently good performances led to the country achieving the ultimate, Test match status in October 2000 when they played their inaugural Test match against India in Dhaka which they lost by a huge margin. Mohammad Ashraful created a world record by being the youngest centurion in the history of Test cricket by scoring a century against Sri Lanka in 2001 in Colombo. Those days were as good as victory.

However, it was time to get serious and Bangladesh had to create a vision statement just like a new business does, in order to perform its operations well. The team might have created a vision, but they clearly failed to implement it. The manner in which Bangladesh have played their cricket till date, makes the cricketing world perceive them as minnows even after 15 years of international cricket. Their desire to just turn up on the cricket field and compete, not win has made them sit pretty at No.9 in both the ODI rankings and the Test rankings for a long period of time.

Dav Whatmore was appointed the team’s coach in 2003 after a disastrous World Cup in South Africa. He had taken up coaching for Sri Lanka as well, at a time when they were mere pushovers but made them world champions. So he had an idea as to how to develop cricket in an Indian subcontinental country. In the national team, ODIS was given preference so that the players can build patience to then tackle the challenges of Test cricket. He created a plan which involved Bangladesh trying to bat out 50 overs in an ODI, and not bothering about what score they achieve. This ensured that the team faced all the 300 balls available and avoid losing all their 10 wickets, especially when batting first which gave them a fair enough chance to hope for a win.

Such wins had begun to arrive. The side beat the World No. 2 India in an ODI at home in December 2004, even if they won that game by a narrow margin. They went on to shock the cricketing world further when they beat a full-strength, world champion Australian side by 5 wickets in a tri-series ODI match in England in 2005, chasing 250 in 50 overs. Ashraful once again came to the party, and scored a famous hundred to guide his team home. They also beat Zimbabwe in an ODI in Harare a year later. An away win was considered special for Bangladesh. The champagne moment though, came when they upset India yet again in the 2007 World Cup in the West Indies which actually helped them qualify for the Super Eights for the first time ever in their cricketing history. And even as their performances dipped later, they also managed to shock South Africa before crashing out of the tournament.

Incidentally that World Cup was also the end of Whatmore’s tenure as coach. Jamie Siddons took over as coach and Habibul Bashar quit as captain, only to be succeeded by Mohd. Ashraful who was their star batsman. However, the move backfired as Bangladesh since then has struggled to continue with the foundations laid by Whatmore and Bashar. Ashraful’s captaincy was criticized heavily and consequently, his batting form dipped. There was turmoil in Bangladesh cricket with several players participating in the unofficial Indian Cricket League (ICL) and there were retirements to follow.

Hastily, Mashrafe Mortaza was appointed captain in June 2009. Bangladesh did not learn from Ashraful’s debacle as they selected their star bowler to lead the side. But he suffered from recurring injuries and Shakib al Hasan had to forcefully take up leadership reins. His emergence as a world-class all-rounder inspired the team to a certain extent as they achieved their first series win in foreign soil in both Tests and ODIS, altogether it came against what can be called a ‘third-string’ West Indies side. Yet, Shakib was not proving to be the right man for the job as the team continued its inconsistent run in all formats of the game. They could only beat Zimbabwe in ODI series away and at home till June 2010. Although they whitewashed a stronger New Zealand team at home in late 2010, that form could not be carried till the World Cup 2011.

Bangladesh tend to play exciting cricket at times as they once again sprung an upset in the grandest stage of them all, by beating England in a group game but at the same time, they can be miserable. A paltry score of 58 against the West Indies in the same tournament cost them a place in the quarterfinals and back home, fans were disappointed as usual.

That has been the story of Bangladesh cricket. They have lots of room for improvement, yet they never have been able to recognize this fact. Radical changes are needed if they have to reach atleast the top 5 of the ODI rankings till the 2015 World Cup. Otherwise, sadly Bangladesh will be categorized as a ‘failure story’ in the history books.