India embarked on their journey of the new season in superb style while beating the hosts, Sri Lanka, all ends up in the five ODI series followed by the only T20.

The Men in Blue started off the tour with five match One Day International series and the first game was held on July 21, 2012, at Mahinda Rajapaksa International Cricket Stadium, Sooriyawewa, Hambantota.The visitors powered 314 runs for the loss of six wickets as their run machine, Virat Kohli hammered 106 and Virender Sehwag missed his ton by just four runs. The home side managed 293 runs with one wicket in hand as Kumar Sangakkara played a brave innings of 133 runs. India won the well fought match with a margin of 21 runs and gained a 1-0 lead in the series. 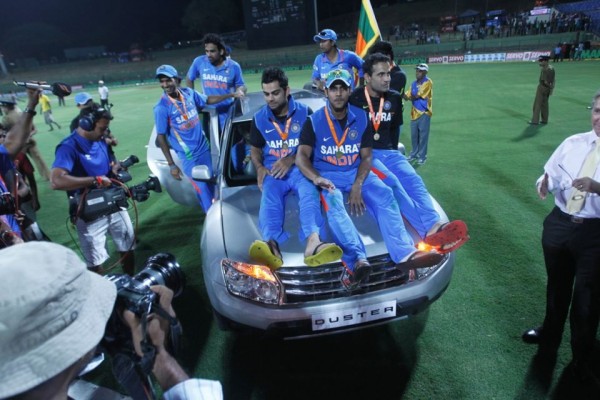 The second ODI was played at the same venue three days later, the Islanders bounced back by winning the match with a huge margin of nine wickets and the series was levelled at 1-1. The Blue Shirts were bowled out cheaply for mere 138 runs in 33.3 overs and the target was attained by the Lankan Lions by scoring 139 runs after utilising 19.5 overs for the loss of just one wicket.

The third match was conducted at R Premadasa Stadium, Colombo, on July 28, 2012. Sri Lanka scored a reasonable total of 286 runs with half of their wickets in hand at the end of the 50th over. Gautam Gambhir smashed a knock of 102 while opening the innings and India posted 288 runs with five wickets in hand. The Blue Shirts came back in the series and were leading 2-1 at the end of the third encounter.

The fourth ODI was held at Colombo again on July 31, 2012, and the hosts scored 251 runs after losing eight wickets. Kohli once again ruled the day with a magnificent unbeaten 128 runs and took away the game from Sri Lanka as India piled up 255 runs with six wickets in hand and 46 balls to spare. The series was won by the visitors at 3-1 and there was still one more encounter left.

The fifth and final match of the series was played at Pallekele International Cricket Stadium, on August 4, 2012. India amassed 294 runs for the loss of seven wickets as Gautam Gambhir dispatched 88 runs. The Islanders fought hard but could reach 274 with the entertaining innings of 77 and 72 from Lahiru Thirimannne and Jeevan Mendis respectively.

India grasped the match by 20 runs and the series was clinched 4-1 while the Men in Blue jumped to no.2 spot in the ICC ODI ranking.

The tour ended on a promising note for India after they beat Sri Lanka in the only Twenty20 which was played on August 7, 2012, at the venue of the fifth ODI. The tourists punished the home bowling by scoring 155 for three wickets and bowled out the local side for 116 runs in 18 overs.

The Indians excelled in all departments of the game as Virat Kohli became the highest run scorer with 296 runs at a superb average of 74.00, the best of unbeaten 128 with two centuries. Gautam Gambhir followed him by scoring 258 runs at an excellent average of 51.60, the best of 102 with two fifties. Suresh Raina played well and managed 174 runs followed by 148 from Virender Sehwag and 135 by MS Dhoni.

Irfan Pathan led the bowling by grabbing 8 wickets at an average of 26.37 runs per wicket with the best of 5-61.Ravichandran Aashwin held 5 whereas Manoj Tiwary, Ashok Dinda and Zaheer Khan ended up with four wickets each.

MS Dhoni led the team from the front, his on field decisions paid off instantly and their fielding was above par in the series. It is an awesome beginning of the season for India and they are one step away from becoming the ICC ODI Champions.