South Africa is known for two things to the world which are similar in nature. Wine and Jacques Kallis. Kallis performs better with age, whether it is with the bat or the ball. Whether it is for South Africa or for Kolkata Knight Riders in the IPL. This man does not have seem to have a use by date and no man would write him off for a good couple of years. 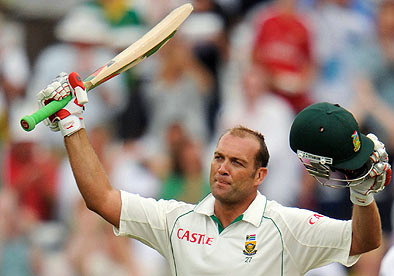 It is a bemoaning fact that Jacques Kallis is not given the credit he deserves to get. If there is a talk show which you could participate in and you are asked to say the name that instantly comes to your mind after hearing the words ‘Cricketing legend’, your answers are likely to be Sachin Tendulkar, Shane Warne, Brian Lara, Muttiah Muralitharan or Ricky Ponting to name a few. It is because of the magnamity of what these players have achieved.

However, I would argue that Kallis’ achievements are no peanuts. Ironically, all the players mentioned above have been through rough patches in their careers for a certain period of time which have not been ignored while if you try to think, when has Kallis have suffered from poor form? The best part is that he is an all-rounder which makes him unique as well as vulnerable at the same time to more criticism.

Jacques Kallis made his debut in international cricket in the 1995-96 home season against England. By now, he is the most experienced player in the current South African team and till date, the team relies on him to bail them out of pressure situations which is why South Africa is one of the top sides in world cricket. Having over 12000 Test runs in his kitty of 250 innings accompanied by 271 Test wickets is a tribute not just to the man’s consistency, but also his physical and mental well-being when it comes to playing the game seriously which very few players possess these days in a competitive environment.

He is often criticized for his slow run-scoring in the shorter versions of the game, but he is the granddaddy of South African cricket in ODIS as well. He bats at No.3 usually, so he has to steady the batting ship of the team which explains his strike rate of 72.88. Yet, he has the second highest runs of all time in this position after Ponting. Not to mention, most of his 267 ODI wickets have won South Africa those matches where he might have failed with the bat.

So not so astonishingly, Kallis’ most glorious years with the bat in Tests have been 2010 and 2011 when he has scored 8 Test centuries to topple off Ponting as the second highest century maker in Tests and one of those centuries (201* against India) is his highest Test score till date! It is said that a cricketer is likely to decline at the age of 35, but Kallis is an exception. Similarly, in ODIS as well South Africa’s success of late is due to Kallis forming a deadly partnership with Amla at the top of the order. He has had only 4 single digit scores in this period and though there is only one century to his name, he has scored many fifties to cover up for it.

IPL stints with the Royal Challengers Bangalore last year and Kolkata Knight Riders this year have helped Kallis change his game to a certain extent and keep himself fit since South Africa has not had a hectic schedule in recent times. What is thrilling to watch is Kallis offer the cricket fan a wide range of shots to watch, which include lovely lofted shots in the cover region and the long-on and long-off region. His strike rate has improved and that has made life much difficult for the opposition since Kallis has proved that he can switch gears as per the situation of the match.

Rarely has an all-rounder been considered a legend in cricket and since the world has not heard much about Sir Garfield Sobers or Keith Miller let alone seen them, it is evident that Jacques Kallis belongs to that distinguished category. He has had stiff competition in the modern era from the likes of Andrew Flintoff and Daniel Vettori or more recently Shane Watson and Shakib al Hasan. Yet, no one commands that much as respect and fear in the oppositions eyes as much as Kallis does. He is still a prized wicket for any bowler in any format of the game and for his captain, he still has the golden arm to pick the wicket of a batsman of any stature.